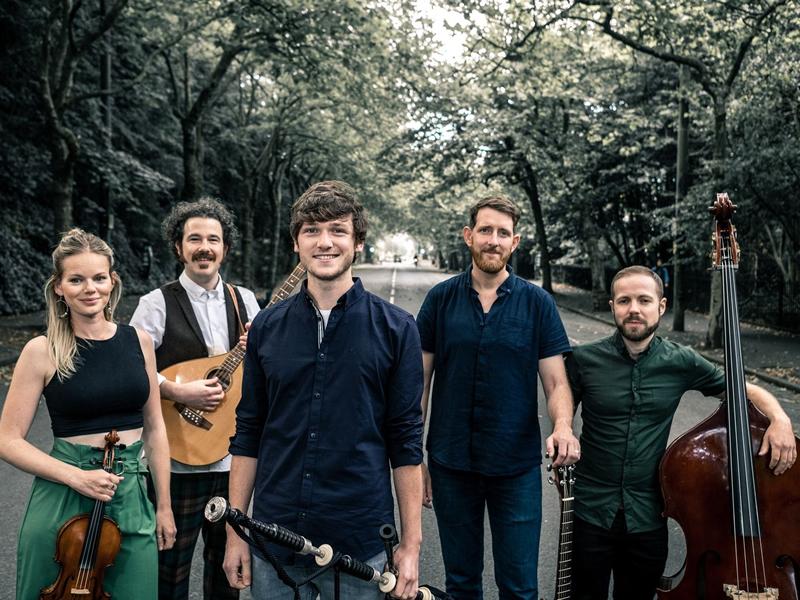 Having closed 2019 by winning the coveted BBC Scotland Traditional Music album of the year, the band were looking forward to a busy 2020.

2020 marked a very special year in the life of Scottish folk favourites Breabach, as it was their 15th anniversary. Throughout those 15 years the band have always looked to acknowledge and respect the origins of both the music they play and the roots of the band whilst embracing the future with new ideas, energy and belief. It is these key attributes, combined with hard work and talent, that has seen them develop into one of Scotland’s most exciting and successful folk groups. With 6 albums under their belt, a multitude of awards and a consistently full touring schedule, quite literally across the world, they look perfectly set to continue to build upon their successes.

The band started their anniversary year by teaming up with Glenturret, who distilled a special single cask 15 year-old single malt in celebration. They then headed off to Australia to perform at the iconic venue of Sydney Opera House.Celebrations continued with a UK wide tour through February and March before the world became a very different place.

The band spent lockdown writing Dùsagadh, five new pieces of music put to animation by BAFTA award winning Cat Bruce. This ‘virtually toured 19 venues/festivals in the UK between the 11th of February and the 1st of March, with proceeds split between both the band and participating venues/festivals.

The Old Swan's Swing Tuesdays and Afternoon Tea are back! Enjoy a traditional afternoon tea accompanied by live music from the outstanding Lee James singing all the Rat Pack classics!
Read more

Enjoy a leisurely stroll with a member of the knowledgeable Ranger team at Muirshiel Country Park on Sunday 26th September!
Read more

Join Sue Kirkwood around a special indoor campfire for some traditional storytelling and sing-alongs as part of Tannahill Arts Festival 2021!
Read more

The Well Happy Band guarantee to get the crowd going with inspiring and up-beat songs about happiness, love, life, laughter and gratitude! Catch them at The Bungalow Paisley on 27th September!
Read more

The End - A One-act Play by Karen Herbison

A Play, A Pud, A Pint and Patter - enjoy Karen's one-act play followed by a Q & A hosted by Script to Stage Renfrewshire!
Read more

Part of Tannahill Arts Festival, Silver Threads is a musical collaboration from Paisley buddies, Neil Thomson and Evelyn Laurie which brings together a collection of songs about their hometown!
Read more

Luca Manning is a major force in UK jazz and consummate jazz singer, Fergus McCreadie has racked up numerous awards since bursting onto the scene in 2018, join them for an evening of music in Paisley!
Read more