Following on from the success of our inaugural Festival, Paisley Book Festival is delighted to be returning in 2021! 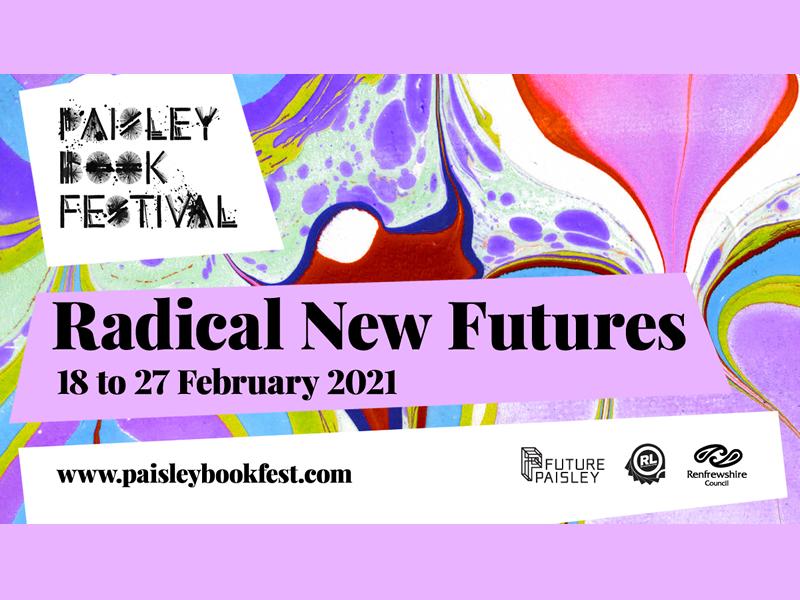 The 2021 Festival will be a digital forum with contributors coming from across the globe into your own home. It is delighted to welcome the 2020 Booker Prize winner, Douglas Stuart, who will be joined by Scottish literary giant, Andrew O’Hagan and debut writer, Graeme Armstrong. Other headline events will include Janey Godley, Melanie Reid, Chris Brookmyre and Dr. Marisa Haetzman, writer for Small Axe series Courttia Newland, Salena Godden, Jenny Kleeman, Kirstin Innes, and Kate Charlesworth in conversation with Val McDermid. Events for children will include Ross Mackenzie, Vivian French, Patience Agbabi, Karine Polwart and Kate Leiper.

Setting the tone for the Festival on its opening night - Radical New Futures - will be poet, playwright and performer Hannah Lavery (The Drift and Lament for Sheku Boyah), writer Laura Waddell (Exit) and Renfrewshire local Alan Bissett with his new novella Lazy Suzan. The opening night will also include Newtopia: Women with Fierce Words, a multimedia performance of writing emerging from women’s disrupted lives as a result of the Covid-19 pandemic, presented by Women With Fierce Words and joined from India by the award-winning poet, Saima Afreen.

All information (whether in text or photographs) is supplied in good faith but should not be relied upon as being a statement of representation or fact. We take every opportunity to ensure the details for Paisley Book Festival are accurate, please contact us at hello[@]whatsonnetwork.co.uk if any of the above information is incorrect.

Paisley’s national festival will be back between the 11th and 19th of October and they have another stellar line-up for you!
Read more

Explore large and small gardens of horticultural interest throughout Renfrewshire, Inverclyde and all of Scotland thanks to Scotland's Gardens Scheme!
Read more

Imaginate is a unique organisation in Scotland, promoting, developing and celebrating the performing arts for children and young people.It is our goal...
Read more

The Festival of Museums is just that – a three day celebration of Scotland’s museums and galleries with events during the day and night!Museums and...
Read more

All Festivals listings in Renfrewshire