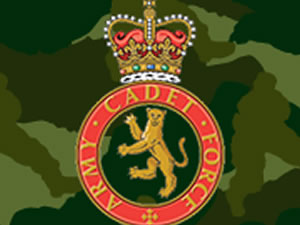 For action and adventure, fun and friendship, the Army Cadet Force is hard to beat.

The Army Cadet Force is a national voluntary youth organisation. It is sponsored by the Army and provides challenging military, adventurous and community activities. Its aim is to inspire young people to achieve success in life with a spirit of service to the Queen, their Country and their local community, and to develop in them the qualities of a good citizen.

This is achieved by:

Providing progressive cadet training, often of a challenging and exciting nature, to foster confidence, self reliance, initiative, loyalty and a sense of service to other people
Encouraging the development of personal powers of practical leadership and the ability to work successfully as a member of a team. Stimulating an interest in the Army, its achievements, skills and values
Advising and preparing those considering a career in the Services or with the Reserve Forces.

All information (whether in text or photographs) is supplied in good faith but should not be relied upon as being a statement of representation or fact. We take every opportunity to ensure the details for Renfrew Detachment Army Cadet Force are accurate, please contact us at hello[@]whatsonnetwork.co.uk if any of the above information is incorrect.

The group was formed in 1941. We have been in our current location for about 40 years.The 33rd Paisley (Gleniffer) Scout Group is a registered Scottish...
Read more

The Fashion Class is for children aged 9-15 who want to learn all about the Fashion Industry. Based in a real Fashion studio the students design, make...
Read more

CREATE is a youth charity based in Paisley, working primarily with young people in music, arts, photography and video.
Read more

Scouting has been in Johnstone for 110 years Johnstone 1st-3rd (Central) is now joined in the town by Johnstone 2nd (Fordbank).
Read more

Scouting actively engages and supports young people in their personal development, empowering them to make a positive contribution to society.
Read more

Do you seek endless fun and adventure? Are you between 10 and 18 years old? Paisley Sea Cadets meet on Wednesdays and Thursdays 7pm to 9.30pm!
Read more

We are a well-established and flourishing group, we are based in Trinity Church Halls, Faulshead Road, Renfrew. We have been going for almost 100 years, serving Renfrew and beyond.
Read more

Thrive is a weekly youth group at St Matthew's Church of the Nazarene where youngsters can socialise with other young people and get involved in various activities in a safe environment!
Read more

We are a youth organisation that aims to respond effectively to the needs of the most vulnerable children, young people and families within Paisley.
Read more

All Youth Groups listings in Renfrewshire

The world's most acclaimed Beatles tribute band, The Bootleg Beatles, will play the Spiegeltent in Paisley as part of this year's Spree Festival!