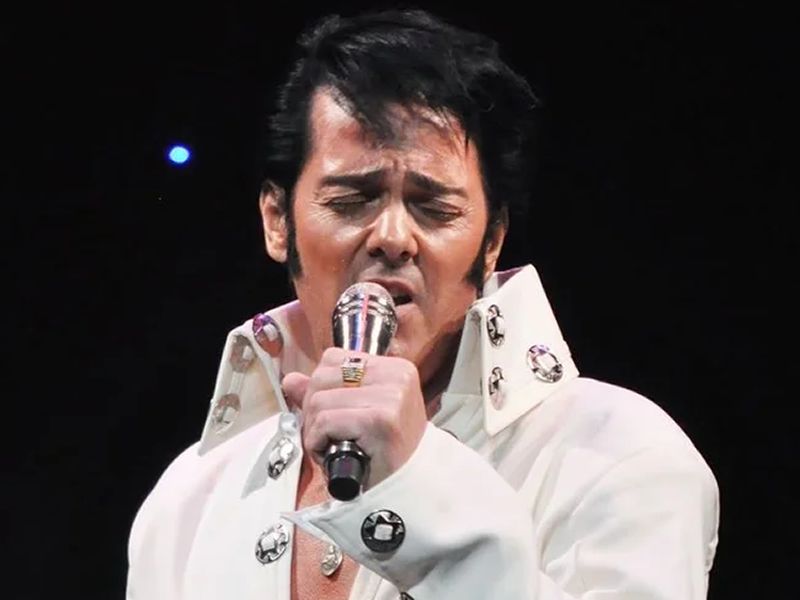 Paul has enjoyed over 30 years of entertaining audiences and performed the original Elvis tribute artist wold tour with the TCB band in the USA, and now with his own 9 piece band, he successfully tours the UK, Norway, India, France, Germany, Austria, Holland, Spain, China, and Malaysia.

​His big break came in 1993 when he appeared on ITV's 'STARS IN THEIR EYES' when he went on to appear in the ULTIMATE live Elvis show, after beating over 10,000 other contenders to win his place in this prestigious television show.

Paul has also made appearances on GMTV 'A search for Elvis, STV 'The Hour', ITV 'The Time and Place', Granada TV 'Taxi Nights' (filmed on location in Manchester's most popular venues.)

​Over the years Paul has gained a celebrity fan base which has seen him perform with some of the worlds biggest stars including Howard Keel, Don Felder, John Miles and Steve Cropper, Lemar and Rick Wakeman.

​During his spare time Paul creates and produces music videos, builds websites, records and mixes songs for himself and various other artists and friends.
Paul has recorded & produced 19 albums in his career, and currently working on a new studio album of original material to be released in the near future.

RocknRollas is proud to welcome Glasgow's very own Motown Brothers to the venue on Saturday 16th July!
Read more

Reformed in 2008 with a roller-coaster career spanning over 40 years, The Blow Monkeys continue to go from strength to strength, catch them live at RocknRollas Paisley on Saturday 23rd July!
Read more

Enjoy an evening of Northern Soul with The Signatures at RocknRollas Paisley on 6th August with all profits raised from the event going to Teenage Cancer Trust!
Read more

Re-live the sounds of the swinging sixties, as Britain's No. 1 tribute show brings the magic of the sixties to RocknRollas Paisley with their tribute to over thirty bands of that era!
Read more

Big Country will perform classic hits including Harvest Home, Fields of Fire, In A Big Country, Chance, Wonderland plus many more when they play RocknRollas in August!
Read more

Taking you back to the 90s indie explosion with a set list of Roses classics don't miss The Absolute Stone Roses live at RocknRollas Paisley on Saturday 3rd September!
Read more

Peat Loaf is well known throughout Europe as THE Meat Loaf tribute act, don't miss your chance to see him live at RocknRollas Paisley on Saturday 10th September!
Read more

The best tribute to Dexys Midnight Runners you will ever see is coming to RocknRollas Paisley on Friday 28th October!
Read more

Darren Connell - Thank You For Being My Friend

Darren Connell is taking his first ever tour on the road, don't miss him when he brings his show 'Thank You For Being My Friend' to RocknRollas Paisley on 25th November!
Read more

Sandy Brechin is one of Scotland's best known accordionists, don't miss him and his band live at Lochwinnoch Golf Club on 16th July as part of Scotland on Tour!
Read more

Experience a fantastic farm animal safari from a purpose built 14 seater all weather trailer where you can enjoy the panoramic 360 degree views of this working farm in Kilmacolm!

Coloursfest returns on Saturday 6th August with its biggest ever show, taking over Braehead Arena and Waterfront for an 11 hour extravaganza!