The cream of Scottish, Welsh, English, Dutch, Irish and Northern Irish darts players will gather at the Normandy Hotel, Renfrew to take part in the 6 Nations Darts Championship! 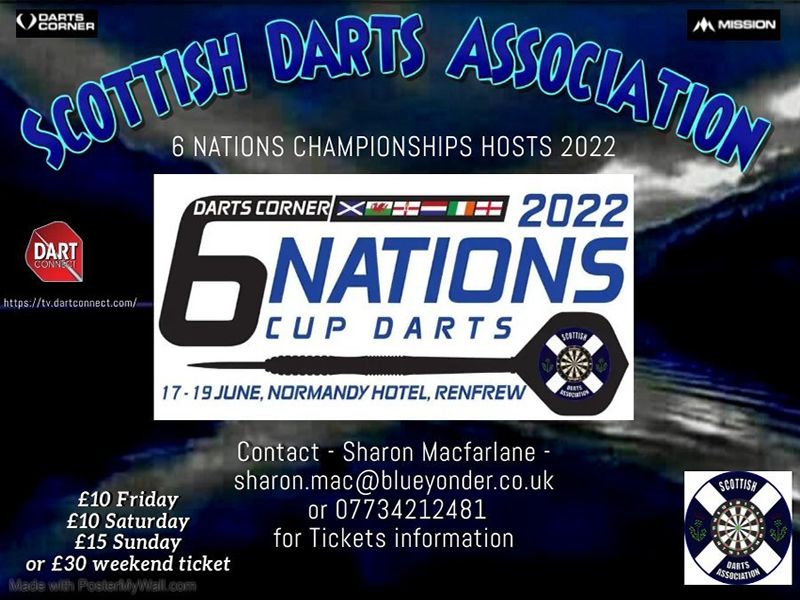 The 6 Nations Darts Championship will be held in Scotland this year, three years after the last event which was held in Assen, Holland.

The cream of Scottish, Welsh, English, Dutch, Irish and Northern Irish darts players will gather at the Normandy Hotel, Renfrew on the 17th June through to the 19th June to provide a feast of European darts.

England’s ladies team are the current champions after their 5-0 whitewash of Northern Ireland in the last final and they will be going for their ninth title this year.

In the men’s event Scotland lost out to the Dutch side in the semi-finals and they went on to defeat Wales 13-5 in the final.

Scotland’s ladies have been drawn with Wales and the Netherlands in Group A while the men have Northern Ireland and England in Group B.

An added bonus is that both current World Champions will be representing their countries, Neil Duff and Beau Greaves playing for Northern Ireland and England respectively.

Get ready for the new season by joining the Glasgow Clan Official Supporters Club for their Family Fun Day on Sun 14th August, there's something for everyone!

The Connected and Caring Carnival