Dippy on Tour, A Natural History Adventure, is now open at Kelvingrove! 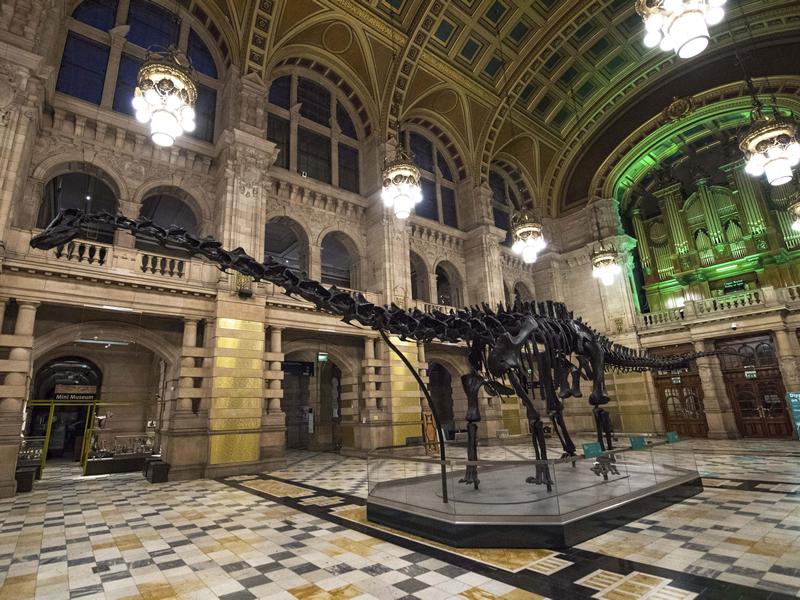 The eagerly awaited Dippy on Tour: A Natural History Adventure is now open and will run until 6 May 2019. Admission is free and you do not require a ticket to visit, although people are being asked to leave a little extra time to see Dippy, especially at weekends and during school holidays.

After delighting over 130,000 people at Ulster Museum Belfast the splendid 292 bone structure, now replete as an impressive 21.3 meter long diplodocus cast, greets guests entering the Centre Hall at Kelvingrove Museum. Dippy’s visit to Glasgow is the only Scottish stop on an eight city UK wide tour.

Dippy on Tour: A Natural History Adventure is being brought to Kelvingrove Museum and visitors across the UK by the Natural History Museum, London in partnership with the Garfield Weston Foundation, and supported by Dell EMC and Williams & Hill.

Director of the Natural History Museum, Sir Michael Dixon said: ‘We are thrilled that Dippy has once again made it safely across the Irish sea and has now arrived at Kelvingrove Museum in Glasgow. This marks the fourth stop of Dippy on Tour - a journey that has so far seen record visitor numbers at the three previous venues. Dippy has acted as an ambassador for the natural world inspiring thousands of children to explore nature on their doorstep. We are sure his impact will be just as powerful in Scotland and hope visitors are as excited to see him as we are for him to be here.’

The Natural History Museum’s Head of Conservation, Lorraine Cornish was joined by Emillie McQuade from Sunnyside Primary School Glasgow, who inserted the final toe bone into position just ahead of Dippy opening to the public.

Emillie McQuade, a Sunnyside Ocean Defender, said: ‘To see Andrew Carnegie’s Dippy arrive on Scottish soil is amazing. I’m sure he would approve of it being on show and inspiring Scottish children…of all ages! As a Sunnyside Ocean Defender, we work hard to ensure that the great creatures we’re lucky still to have don’t end up only seen as museum pieces. So we hope that Dippy not only inspires people to find out more about nature’s past, but also motivates them to protect and treasure what we still have.’

Diplodocus carnegii is named after Andrew Carnegie, the Scottish-American steel magnate and philanthropist who financed its excavation in Wyoming, USA in 1899. It was to become the centrepiece of The Carnegie Museum of Art in Pittsburgh. King Edward VII saw a sketch of the dinosaur while visiting Andrew Carnegie at his Scottish castle, Skibo and began a conversation that resulted in the commission of a replica cast. Dippy, as he became known, was unveiled at the Natural History Museum London in 1905, where he remained one of the most popular exhibits until preparations began for Dippy on Tour in 2017.

It took a team of four technicians and two conservators from the Natural History Museum London five days to piece the giant jigsaw together at Kelvingrove Museum, where, for the first time, visitors could watch the transformation take place from the balcony.

Dippy on Tour is on a mission to inspire five million natural history adventures and encourage families to explore nature on their doorstep. Glasgow Museums will use Dippy’s visit, together with a supporting public and schools programme, to showcase the city’s natural history collection and stunning local natural habitats.

For further information on Dippy on Tour and associated events, visit www.glasgowmuseums.com. #DippyOnTour

Hosted by Mystery2Escape, Ten Little Spectators is an online hosted escape game for everyone who likes brain teasers and puzzles!