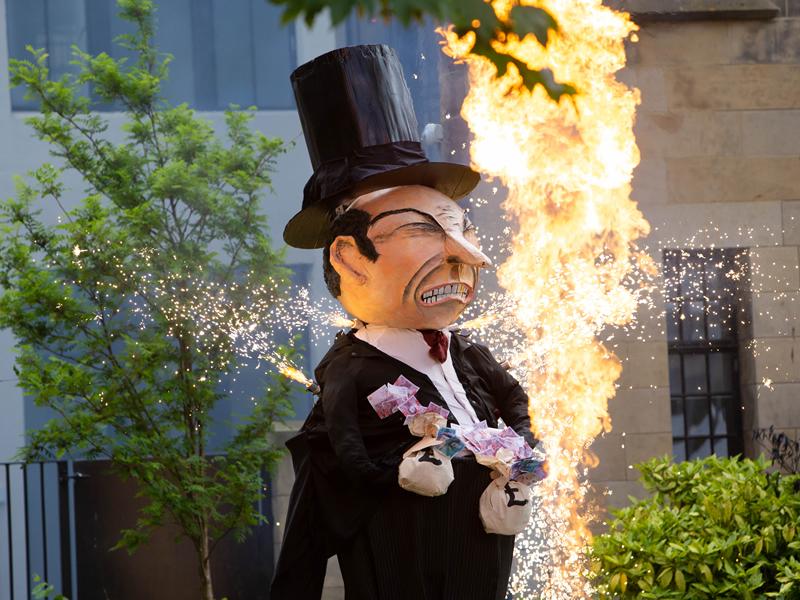 A crowd of thousands enjoyed an all-day family spectacular of parades, performances and pyrotechnics as one of the world's oldest workers' festivals took over Paisley town centre!

The annual Sma’ Shot Day event turned the town into a hub of activity as the sun shone, with more than 50 events taking place across 20 outdoor stages and venues.
The event – which celebrates the victory of Paisley’s weavers in a 19th-century industrial dispute – celebrates the town’s rich textile heritage and had the theme ‘let’s party like its 1856’.

The fun began with the colourful parade – featuring colourful characters, floats and costumes and led by the Charleston Drum – from Brodie Park to the town centre.

This year’s event was taking place in a new event site in the streets around the town’s historic Sma’ Shot Cottages.

Huge crowds gathered at Paisley Arts Centre for the spectacular pyrotechnic Burning of the Cork, featuring an effigy of one of the middlemen who demanded payment from the town’s weavers for the Sma’ Shot – the unseen thread which held together the Paisley Patterned shawls.

The outdoor stages saw performances from groups including PACE Youth Theatre, Right2Dance, Starlight Music Theatre and a drumming finale from the Charleston Drummers School of Rock.

The pubs and clubs along Shuttle Street opened their doors for the day to join in the fun – with The Bungalow hosting a family ceilidh with local group Fèis Phàislig and kids workshops in Faction nightclub.

Local businesses across the town have been throwing open their doors for the Creative Craft Trail, with designers from Renfrewshire’s InCube creative business incubator showing off their skills at various venues around the town today and tomorrow.

Renfrewshire’s Provost Lorraine Cameron, who joined the parade on the day, said: “Once again, there was a wonderful family atmosphere along the parade route and at the event itself as we celebrated this important part of Paisley’s heritage.

“The new event site worked really well and helped spread the activity and benefits throughout the town centre.

“We were delighted this year to work with many of the pubs, shops and cafes to make them venues for event activity and drive footfall directly through their doors.”

Sma’ Shot Day is part of Renfrewshire Council’s major events programme which last year brought around 160,000 attendees and an economic boost of around £4.7m to Renfrewshire.