Hundreds pay their respects to the Armed Forces in Renfrewshire

Renfrewshire has paid tribute to the Armed Forces as hundreds attended services across the area to mark Remembrance Sunday, with the largest service taking place at the Cenotaph in Paisley town centre 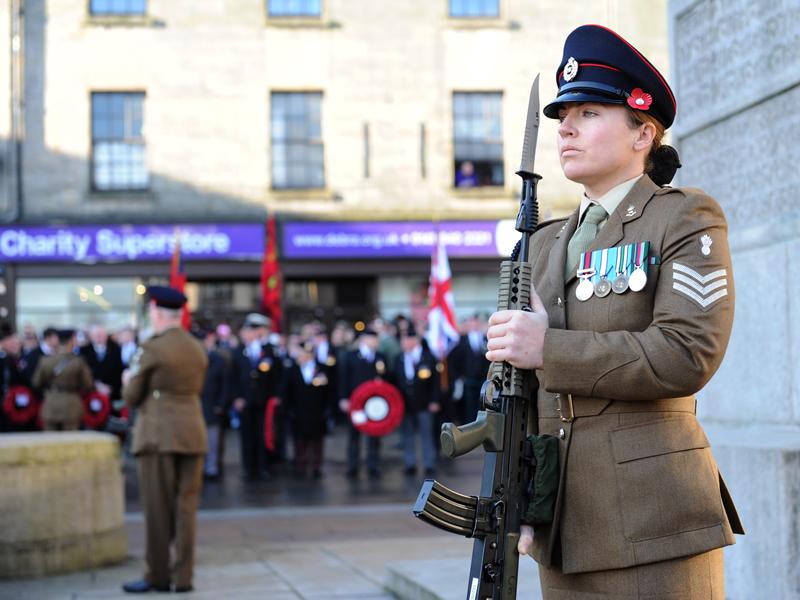 More than 200 people paid their respects as military personnel from the Army, Royal Air Force and Royal Navy paraded around the town centre before finishing at the Cenotaph.

A short service then saw a series of readings by local ministers, before the Royal British Legion presented their standards.

A bugler played a moving rendition of the Last Post ahead of the traditional two-minute silence, following which wreaths were laid on behalf of the Armed Forces, schools, local organisations and community groups.

Renfrewshire’s Provost Lorraine Cameron, who laid a wreath on behalf of the people of Renfrewshire, said: “This weekend provides us all with an opportunity to pay our respects to the Armed Forces, past and present, for all they do to keep us safe, while remembering those who have given the ultimate sacrifice.

“It’s fantastic to see so many people turn out to services across Renfrewshire and it shows the spirit within our communities that they want to come together to show their appreciation for our service personnel.

“It’s also great to see the interaction between our veterans and young people each year as we educate the next generation on why it’s so important that we mark Armistice Day and encourage them to continue this tradition in years to come.”

Renfrewshire’s weekend of remembrance began on Friday 8 November as the annual Children’s Remembrance Service took place at the joint-campus of Mossvale and St James Primary in Paisley.

Depute Provost, Councillor Cathy McEwan, joined veterans from the Royal British Legion as they visited the school to see a presentation from the pupils on what they’ve learned about Armistice Day, before speaking about their experiences of having served in the Armed Forces.

A new and exciting programme of online cultural events is being staged to celebrate Black History Month.

Set those alarms... an additional seven nights of GlasGLOW are set to go on sale tomorrow morning at 7.30am!

The Great British Bump Off - A Virtual Murder Mystery Challenge

The Great British Bump Off is a virtual murder mystery challenge presented by the award-winning MurderedforMoney!

Every Sunday is a Sunday Treat Day at Cafe Fairfull... why not bring along a friend or even the whole family?