Drive-in movies are coming to the boardwalk at intu Braehead to raise money for charity! 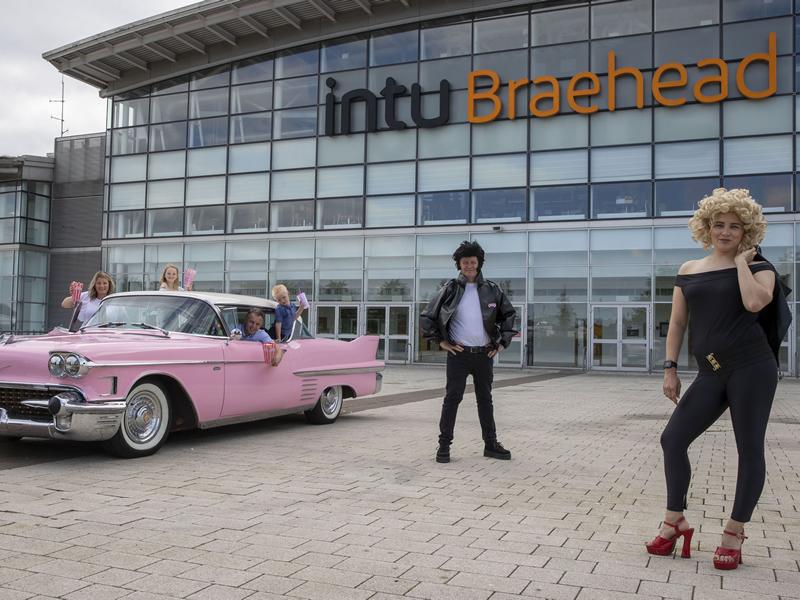 the Gordon family moved like greased lightin’ when they bumped into lookalikes for Danny Zuko and Sandy Olsson from the Grease movie – one of a host of films being shown during the five-day Lockdown Drive-in event from Wednesday, July 29 until Sunday, Sunday 2 August.

Dad, David, mum, Gillian and kids, Ava, seven and five-year-old Max, from Foxbar, in Paisley also got to ride in a 1950s Pink Cadillac after they had taken a stroll past the shopping and leisure destination.

The Arena at intu Braehead has teamed up with the Catherine McEwan Foundation charity to help raise much-needed funds to help people living with Crohn’s and Colitis get better care, treatment and quality of life.

Tickets costing £35 per car plus booking fee, and are now on sale from www.lockdowndrivein.com but NHS workers will get a free night out at the movies, as the first showing of Grease is exclusively for NHS workers.

To apply for free tickets, hospital and medical staff should apply to the booking website and give their NHS number. The free tickets will be allocated on a first-come-first-served basis.

There will be two films shown on a giant screen every night and four movies at the weekend, with the audio broadcast via a frequency that car radios can be tuned to.

As well as tickets going on public sale for the Grease Singalong movie – which has lyrics to all the songs running along the bottom of the screen so everyone can join in – other films being shown are Jurassic Park, Mama Mia, Goonies, Finding Nemo, Lion King, The Lost Boys, Back to the Future and Dirty Dancing.
There will be 160 cars at each show, refreshments with be provided by the UK’s top street food operator, The Big Feed who will be on site.

Mum Gillian said: “This is a fantastic idea to have a drive-in movie on the boardwalk, as it gives families somewhere to go for a night out during lockdown.

“When we found out that the Grease movie was being screened we decided that this was definitely the one that we want!”

Derek McEwan, who launched the Catherine McEwan Foundation after his mother, Catherine passed away after years of suffering from Crohn’s Disease said: “Drive In movies are a major part of our annual fundraising and in these very testing times they have never been more important. To bring our concept to the iconic Braehead Boardwalk is huge for us and will add to the amazing experience for all our cinema goers. It is especially pleasing to have a free night as a thank you to all our NHS heroes where 360 families can come down and enjoy a movie on us”

“It’s a great opportunity for people from the same household to get some normality back for a while with a night out at the movies.”