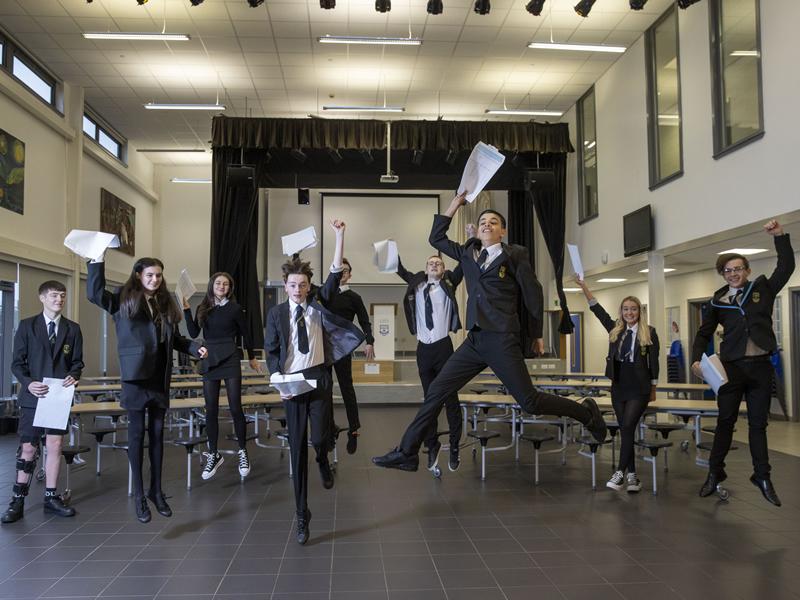 This year’s results day was different from usual – having been decided under an alternative certification model after the final exams were cancelled due to the coronavirus pandemic.

That saw the Scottish Qualifications Authority issue pupils with grades based on estimations provided by the schools and then moderated by the SQA.

And a selection of pupils from Linwood High were in school to give their reaction as their results arrived – joined by a camera crew from the BBC for a nationwide live TV and radio news broadcast.

Brooke Adam, 16, of S5, said: “I got six As and a B and I’m very happy with it. Next year I am doing five Highers and when I leave school I’d like to be either a paediatric doctor or a child’s nurse.

“It was a bit nerve-wracking because we didn’t sit exams so I didn’t have an idea of how I’d done, so that was a bit weird.”

Dylan Kidd, 17, who has just finished S6, said: “I sat four subjects this year all at Higher level – and I got As in three of them and a B in the other.

“I’ll now be going on to Glasgow Caledonian University to do computer games design. Not having exams actually made the year less stressful as I didn’t have to worry about studying during the exam diet.”

Gillian Macartney, head teacher of Linwood High School, said: “I would like to congratulate all our pupils on their results this year. I am incredibly proud of each and every one of them.

“Our results have been improving year-on-year and that’s down to our work on raising attainment and achievement across the board. Our pupils have worked incredibly hard and their results are well deserved.

“Our teachers and school staff are incredibly dedicated and have supported our pupils to achieve the best outcome for them, whether that is today’s results or wider achievement.

“There are many pathways that our young people can take towards their chosen career and it’s our job as teachers to ensure that pupils achieve the best outcome for them.

“I would also like to thank our parents for their continued support of the school and pupils. It has been a challenging few months for our whole school community. We are looking forward to returning to school and supporting our young people to achieve their goals and future dreams.”

Across Renfrewshire, attainment has again increased in S4 at both national 4 and national 5 in almost all measurements, with two-thirds now achieving three or more national 5 awards.

S5 attainment remains very strong with an increasing number of young people achieving National 5 and Higher awards. Over a third of pupils achieved three or more awards at Higher.

Councillor Jim Paterson, convener of Renfrewshire Council’s Education and Children’s Services Policy Board, added: “I want to say well done to all our senior pupils. It’s been an incredibly tough year with exams being cancelled for the first time since the system started in Scotland.

“I hope you got the results you wanted and they reflected the hard work and effort you put in across the year and it’s important that we take this opportunity to celebrate the achievements of all young people.

“There are many paths you can take to get into your chosen career. If your results weren’t what you wanted, please speak to our schools for advice. Whether you are returning to school or moving onto college, university, an apprenticeship or work, I wish you the very best for the future.”