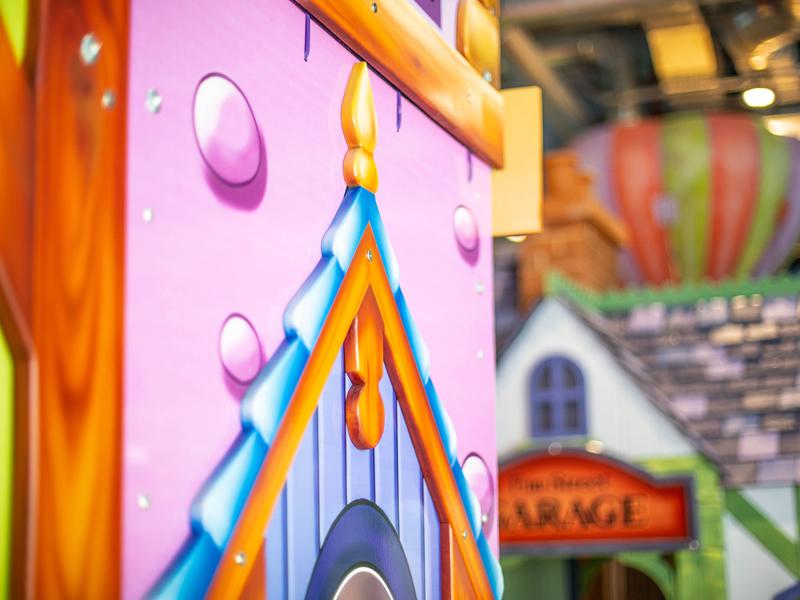 Buckets of imagination have been poured over the giant family entertainment complex - the first of its kind in Scotland to combine interactive play, digital innovation, augmented reality games and multi-level soft play into one dedicated venue for children to have fun.

Spanning over two levels, the new indoor land of adventure has transformed a 14,000 sq ft space to create a world of wonder for children from aged 0 - 12 in one of Glasgow’s top retail centres.

Split into six zones, the awe-inspiring interactive playground has something for children of all ages with technology and creativity at the forefront of the new global venture.

Upstairs is the perfect place for older children; watch them climb up an augmented climbing wall, have a go at chasing zombies on one of the digital gaming walls, or enjoy interactive play and animation on giant screens.

Meanwhile, take a slide downstairs to enjoy a giant multi-level soft play and ball fountain, or why not take a stroll through the fully immersive ‘Fun Street’ town which inspires lots of imaginative play and creativity. You will also find here a huge nine-screen video wall that will play family movies and music videos.

Younger children will love the tropical beach zone as they reach forward with a digital spade to collect sand and dip their toes into crystal clear blue seas. For babies and toddlers, there’s a sensory area complete with a magical talking tree for storytime sessions.

And for parties and small gatherings, the team has exclusive party rooms equipped with high tech video home cinema and sound systems to cater for everything from movie parties to birthdays and baby showers for mums-to-be.

The new two-level space is located adjacent to PureGym outside Silverburn’s Winter Garden, amidst the destination’s diverse array of dining operators. Fun Street itself will welcome a vibrant family restaurant with an all-day menu, from simple snacks to full meals, with healthy, organic, and vegetarian options.

Dr Usman Qureshi and wife Mrs Shafea Qureshi, owners of Fun Street, added: “For the last two years, we have been working hard to bring our dream for Fun Street to life.

“Fun Street is a totally individual concept. It is not just a soft-play, it is a complete family entertainment centre for the whole family, jam-packed with activities, music and an on-site restaurant for parents to relax in while their kids have fun.”

Iain Mitchell, UK Commercial Director at Hammerson which owns Silverburn shopping centre, said: “Fun Street, one of the largest of its kind in Glasgow, is a fantastic addition to Silverburn, as we look to provide even more for the huge number of families that come through our doors each day. Leisure is becoming increasingly important for complete destinations, and the fact this is a debut site for the brand shows how strong Silverburn is for this offer.”

Bookings are set to open early September, you can sign up now for exclusive offers and updates from www.funstreet.co.uk

Fun Street opens to the public on Wednesday, 16th September 2020 and will operate from 10 am until 7 pm seven days a week.