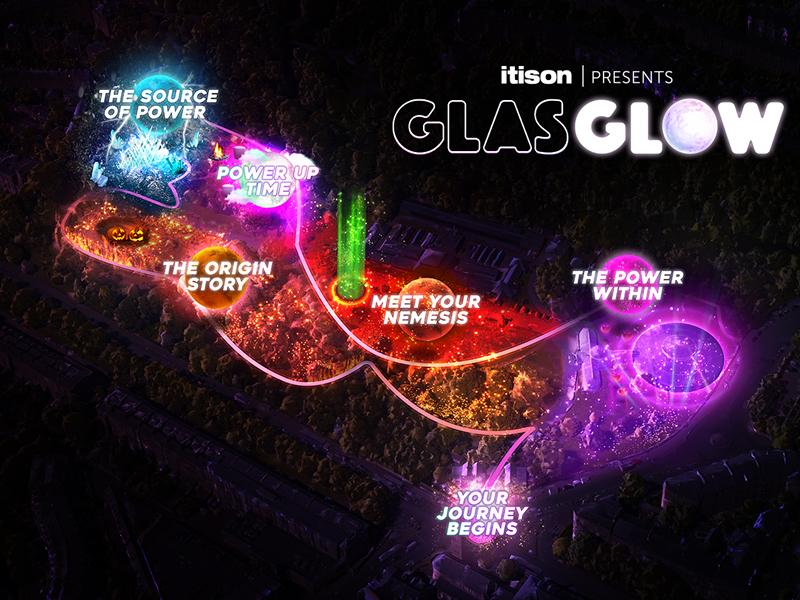 Last week, itison announced GlasGLOW would return for the third consecutive year to light up the city this Halloween season. Today they reveal the fully outdoor trail will return to Glasgow’s Botanic Gardens from the 29th October to the 8th November with early bird tickets on sale on the 16th September at 7.30am, exclusively at www.glasglow.com

One of the only shows set to go ahead this year, GlasGLOW will spectacularly transform the Botanic Gardens into an immersive superhero story. In a world of darkness and gloom, heroes will rise up and discover their own superpowers. This year, it’s time for you to discover the power within and become the hero of your own story.

The brand-new show will transport families to other worlds including: The Origin Story, The Source of Power, Power up Time, Meet your Nemesis and The Power Within.

Oli Norman, CEO of itison and GlasGLOW creator, said: “This has been a long, tough year for everybody, we believe more than ever in the power of bringing communities together safely.

“We’ve written out a story all about discovering the power within, I might not be able to take my kids trick or treating this year, but instead I can turn them into superheroes! We can’t wait for everyone to join in on the journey!

“We’re also incredibly proud to be bringing back The itison Pumpkin Fund, our community engagement initiative, which will give back to those who need it most and fund another project in the community this year.”

itison’s world class team of producers and sound, lighting and set designers have been working closely with the Scottish Government, Event Scotland and Glasgow City Council to guarantee a safe and fun GlasGLOW with new measurements including:

Tickets will go on sale next Wednesday 16th September at 7.30am exclusively at www.glasglow.com