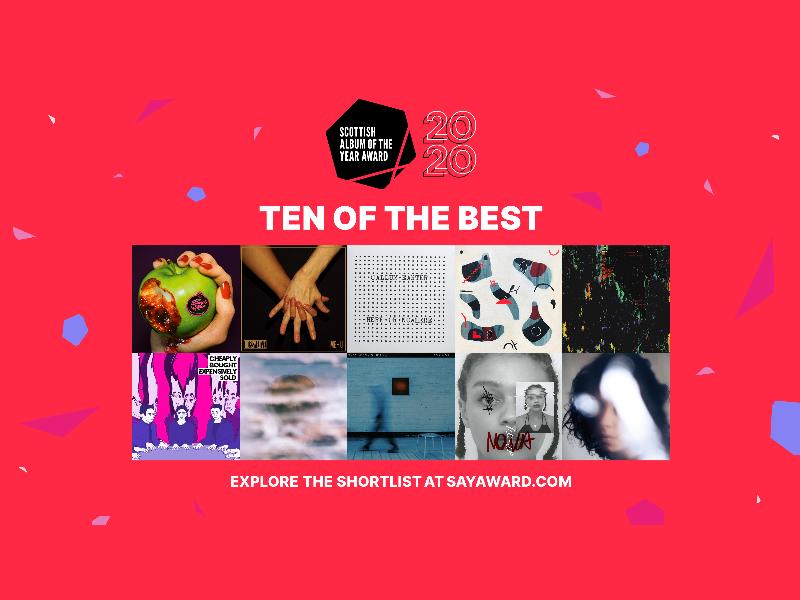 The Shortlist for this year’s Scottish Album of the Year (SAY) Award has been officially revealed, with Scotland’s 10 most outstanding albums of the last year announced as;

This year’s Shortlist also includes a record-breaking EIGHT debut albums, the most to ever feature in a SAY Award Shortlist.

The highly-anticipated Shortlist was revealed today via SAY Award supporters Glasgow Science Centre’s ‘Big Screen’. Lucky bypassers had a first look at the final ten Scottish artists on the Shortlist as the Big Screen teased the list hours before the big unveiling, by featuring lyrics from each album on the screen, before finally releasing the official Shortlist at 7pm.

The Shortlist for this year’s Scottish Album of the Year (SAY) Award has been officially revealed, with Scotland’s 10 most outstanding albums of the last year announced as;

This year’s Shortlist also includes a record-breaking EIGHT debut albums, the most to ever feature in a SAY Award Shortlist.

The highly-anticipated Shortlist was revealed today via SAY Award supporters Glasgow Science Centre’s ‘Big Screen’. Lucky bypassers had a first look at the final ten Scottish artists on the Shortlist as the Big Screen teased the list hours before the big unveiling, by featuring lyrics from each album on the screen, before finally releasing the official Shortlist at 7pm.

Glasgow Science Centre said, “Glasgow Science Centre are delighted to support The Scottish Album of the Year Award this year - it was so exciting to reveal this year's highly-anticipated Shortlist on our Big Screen. We feel so passionately about supporting Scotland's arts and culture industry during these times and to reveal the ten most outstanding Scottish albums of the past year was a real honour. Congrats to all the Shortlisted artists!”

Nine albums on the Shortlist were chosen by this year’s esteemed Judging Panel, while the tenth was decided by music fans in a 72 hour public vote via www.sayaward.com. An incredible chance for music fans to ‘have their SAY’ in Scotland’s national music prize and influence which albums make the Shortlist, the winner of the public vote was Callum Easter’s ‘Here Or Nowhere’.

Callum Easter said, “It means a lot to win the public vote. That’s the top prize for me. Thanks to everyone that voted.”

General Manager of the Scottish Music Industry Association (SMIA), Robert Kilpatrick said, “This year’s Shortlist is an emotive list of records which shows strength, ambition and confidence in the last year of Scotland’s recorded output. It presents a strong sense of Scotland’s diverse cultural identity, particularly from a wave of new artists, with an incredible eight debut albums making up the Shortlist of ten; a first in the history of the award.

This year’s Shortlist poignantly showcases a future vision of Scottish music – of Scotland’s music industry – one which urgently needs targeted, sector-specific Government support to wave the continued storms of the COVID-19 crisis and to allow a vital industry on its knees to survive.

Music adds key economic, social and cultural benefits to our society and to each of our lives. It plays a fundamental role in driving tourism through our events and festivals, having generated £494 million for Scotland’s economy in 2018. But most importantly, our musical output helps us connect with both ourselves and each other. It provides us with emotional and mental well-being, and it often reflects the stories of our lives and the stories of our communities.

All of this is currently at risk, and while the Scottish Government through Creative Scotland have provided some emergency funding for venues and hardship funding for artists, without further targeted support, our sector faces a severe and catastrophic loss of jobs and skills which would do long-term damage to music and culture for decades to come.

As we announce this year’s SAY Award Shortlist, it also comes with a message that celebrating and championing our music and culture is more important now than ever. The strength of the albums on this year’s Shortlist gives a compelling reason for all of us to do so, not least due to the fact that it highlights the quality and strength of new Scottish talent, and how much that needs to be supported at this fundamental time.

The SAY Award will now work to connect these albums with more people both within and outwith Scotland over the coming weeks, before announcing this year’s winner on Thursday 29th October.

A huge congratulations to each of this year’s Shortlisted albums. These are 10 genuinely outstanding Scottish records, and we implore you to listen to them.”

2020’s Shortlist provides a snapshot of the strength and diversity of Scotland’s music scene, spanning a range of genres and styles to celebrate the country’s most outstanding albums, and the incredible network of people who created them. Each Shortlisted album has won a guaranteed minimum prize of £1,000 and will receive an exclusively designed art prize created by The SAY Award Design Commission.

The SAY Award Design Commission, curated by Local Heroes, highlights the enduring links between music, art and design in a country overflowing with talent. This year, Local Heroes are delighted to reveal the design commission will be made by Glasgow based designer and architect, Rekha Barry. Barry's love for object design stems from her experience in model-making and casting at art school; something she has been refining further over recent years. Each of the ten Shortlisted artists will receive a bespoke trophy designed by Barry who has created a simple, monolithic design for this year's award that is both functional and sculptural.

Rekha Barry said, “I’m really excited to be commissioned to design this award for Scotland’s musicians and to be working with Local Heroes – it’s a brilliant project to be involved in.”

This year’s Judging Panel is made up of a broad range of influential and experienced tastemakers from across the creative industries, tasked with deliberating over this year’s Nominees to eventually decide who should pick up the coveted title of Scottish Album of the Year.

Founded in appreciation of the album as an artform, The SAY Award is the product of an extraordinary nationwide consultation. Recognising an album as greater than the sum of its parts, the award champions albums as culturally significant and artistic achievements. This year, a record-breaking 362 eligible album submissions were narrowed down to the 20-strong Longlist by 100 impartial nominators; representing a variety of genres including jazz, classical, hip-hop, pop, trad folk, rock, electronic, indie and many more. The Longlist has now been whittled down to a Shortlist of just 10 albums; with 9 chosen by the Judging Panel and the winner of the public vote.

The winner of The SAY Award will be announced on Thursday 29th October, with this year’s ceremony pivoting to become an online event, broadcast as a YouTube Premiere. One artist and their album will be crowned the Scottish Album of the Year, in turn collecting one of the most lucrative prize funds in the UK: £20,000.