Paisley Museum has released details of their Syrian glass collection dating back over 2,000 years which has never been displayed before. 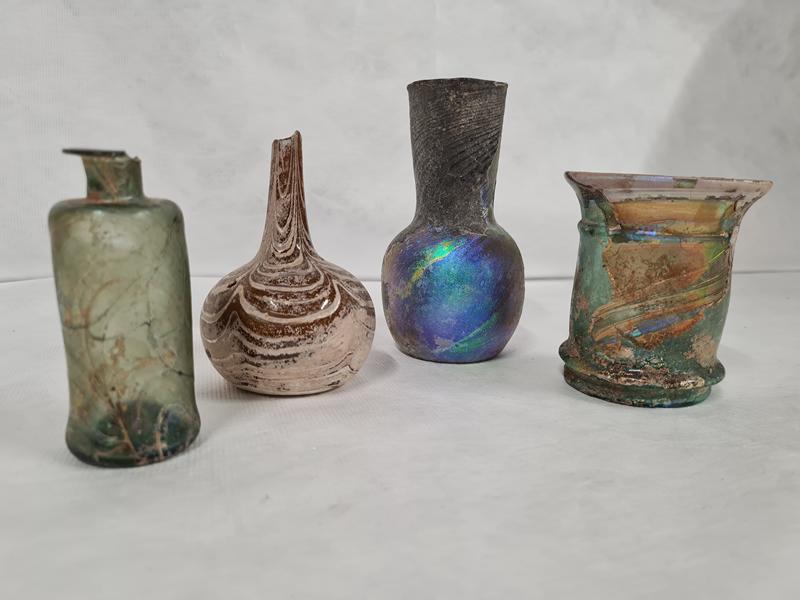 It's been five years since the first refugees from Syria arrived in Renfrewshire through the UK Government’s Vulnerable Persons Resettlement Scheme. To mark this occasion, Paisley Museum is releasing details of their Syrian glass collection dating back over 2,000 years which has never been displayed before.

In 2015, Renfrewshire was among the first Scottish councils to welcome Syrian refugees. Five years on, the Paisley Museum team is working closely with some of the town’s refugees to create a modern-day response to its glass collection for a brand-new display.

Despite being held in Paisley Museum’s collections since the 1940s, the potential significance of the glassware was only recently realised by Research Assistant Joel Fagan whilst moving objects into The Secret Collection, in preparation for the museum’s £42m redevelopment. This may explain the objects’ remarkably good condition, despite its fragility.

Damascus is known as the birthplace of glass making, with glassblowing still prevalent in the region today. Started over 4,000 years ago, by 200AD Syrian glass was traded throughout Europe. The glass in the Museum collection was either bequeathed or purchased from local dealers in Baalbek and Damascus in the early 1900s.

A partnership between a group of Syrian learners and the museum was established through their participation in English language classes delivered by Renfrewshire Council’s Adult Learning and Literacies Services. Following sessions with the museum team, including a trip to a glassblowing workshop and a visit to The Secret Collection, the group chose 13 pieces of glassware from the 2nd and 3rd century AD including a Syrian glass beaker from Damascus, a brown bulbous bottle decorated in fluorescent and gold, and a purple beaker with a dark feathered design for display. Future sessions will involve creating interpretation for the display in both Arabic and English, which will incorporate some of the group’s personal stories.

The display is part of the £42m redevelopment of the museum, which when it reopens, is anticipated to attract upwards of 125,000 visits each year and provide a £79m economic boost to the area over the next 30 years.

Joel Fagan, Research Assistant - World Cultures and Global Perspectives, Paisley Museum Re-Imagined Project said: “The work we have done with the group will play a key part in bringing Paisley town’s globally-significant collections and history to life and ensuring all of Paisley’s voices are included in our interpretation. The Museum’s Syrian glass collection is truly significant and we are looking forward to displaying it for the first time when we open.”

Family members Jamal Horani and Khadeja Alhorani arrived in Paisley from Syria in 2018 and are part of the ESOL group who have been working with the Paisley Museum on the Syrian glass objects.

Jamal said: “We were so happy and surprised to find these pieces made by our ancestors were here in Scotland. We used to collect these types of glass items at home back in Syria and it made me feel quite emotional and proud to find them here.”

Khadeja, added: “We want people to know that we have a great civilisation and that our glass making is known very well across the world. It’s not just the conflict - there are many other good things about our country.”

Councillor Lisa-Marie Hughes, chair of Renfrewshire Leisure said: “These magnificent items provide a snapshot of the rich cultural heritage refugees had to leave behind when they fled from the conflict in Syria. Like everyone who lives and works in our town, the Syrian families have become an important part of our community, and we are delighted that they are taking an active role in the redevelopment of Paisley Museum.”

Since 2015 Renfrewshire has welcomed more than 160 Syrian refugees to the area. Families receive a wide range of support to settle within the area through Renfrewshire Council’s refugee resettlement scheme. The support includes registration and access to health and education services, the provision of English for Speakers of Other Languages (ESOL) and assistance with applications for benefits via the Department of Work and Pensions (DWP).

All of Paisley Museum’s collections are currently held in Paisley: The Secret Collection. Up until lockdown measures were introduced to combat Covid-19 back in March 2020, The Secret Collection – the only publicly accessible museum store on a UK high street - was open to the public for weekly guided tours and for sessions with co-production partners. The development of the store is one of the first steps to help drive the economic regeneration of Paisley town centre through arts, culture and heritage.