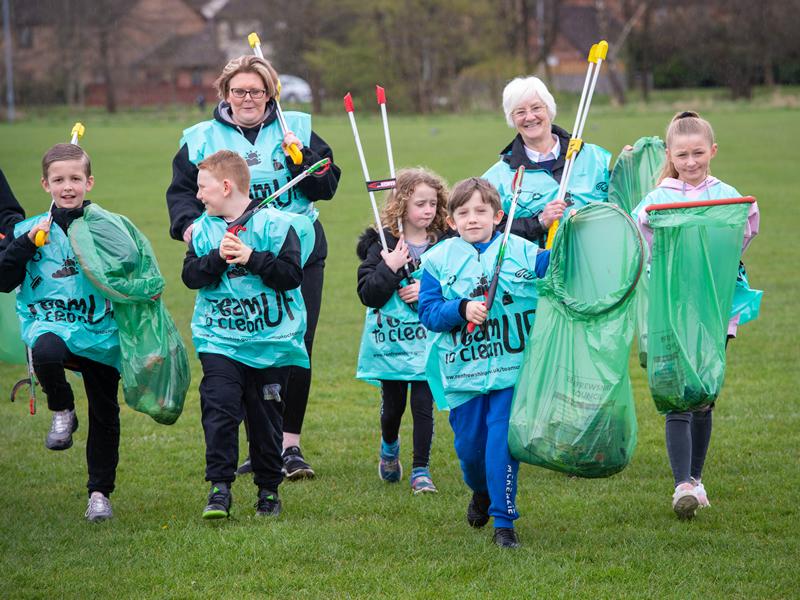 Image: The Our Place Our Families team

As part of Renfrewshire Council’s Team Up to Clean Up campaign, more than 1,500 volunteers took part in a litter pick in 2020 and removed an incredible 4,430 bags of litter from the local environment.

In addition to these bags, larger items of fly tipping such as tyres, trolleys or household waste have been actively reported to the council who have removed them as a priority through their StreetScene team.

In total, 707 litter picks took place by lone litter pickers, families, workplaces, schools and group events as communities continue to take pride in their neighbourhoods and encourage behaviour change from their fellow residents.

All volunteers are given health and safety advice, including adhering to the number of households they are able to meet under current restrictions, following physical distancing and only picking up what is safe to do – with any glass or similar items reported to the wardens service.

Volunteers continue to spring up across the area and Dargavel Village in Erskine is latest to benefit, with 15 new people joining the campaign since the beginning of the year.

Local volunteer Ross Baillie said: “When we moved to Dargavel, we wanted to be 'net contributors' and so picking up litter as part of Team Up to Clean Up seemed like a simple way to start that in our new neighbourhood.

“Some friends also started volunteering to do the same and each of us that does it talks about the sense of achievement when we have collected a bag.

“It is this sense of achievement that keeps us going back and picking more. Not only are we contributing to keeping our neighbourhood clean, we are supporting wildlife and our environment too.”

The campaign is joint initiative between the council and the community, with bibs, litter pickers and bags provided free of charge to volunteers and the rubbish collected cleared by the council as soon as possible after it takes place and posters put up in the area to showcase that it was tidied by volunteers.

The council continue to drive behaviour change through the campaign which tackles litter, recycling and dog fouling, as well as making a sustained investment in clearing drains and sweeping roads.

Councillor Cathy McEwan, Convener of Renfrewshire Council’s Infrastructure, Land and Environment Policy Board, said: “I’m always amazed at the level of enthusiasm and dedication that our volunteers have to make Renfrewshire a cleaner, better place to live, work and visit.

“The fact they’ve managed to remove so many bags of rubbish last year is incredible and sad at the same time, but hopefully the campaign is inspiring people not to drop rubbish and to take care of where they live.

“Our volunteers are a shining example of what our communities in Renfrewshire can be and we’ll continue to work alongside them to provide the support they need to take part in the campaign.”

More than 1,600 like-minded people have joined the campaign’s Facebook group to share ideas, seek support and showcase what they’re doing to improve their neighbourhood.

For more information on the campaign and how to get involved, visit www.renfrewshire.gov.uk/teamuptocleanup.