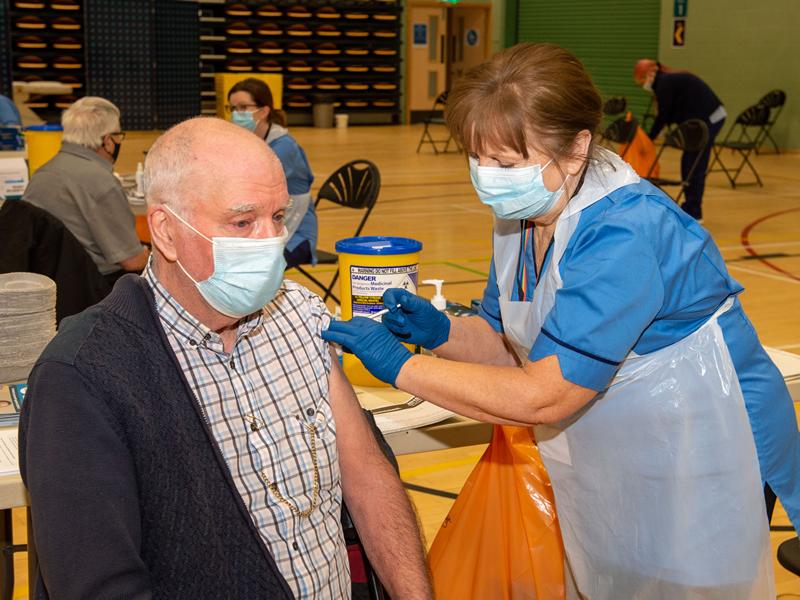 The facilities at Paisley’s Lagoon Leisure Centre, Renfrew Leisure Centre and Johnstone Town Hall opened their doors this morning – with thousands expected to attend in the weeks ahead.

Those attending on day one were mainly from the 70-74 age group – with that cohort having received their appointment letters from the NHS as part of the national vaccine rollout.

Those aged 65-69 will be next to receive a letter inviting them to be vaccinated at the centres at some point in the coming weeks, with other age groups to follow at later dates.

And – speaking after they received their jabs – some of the first visitors to the centre at Paisley’s Lagoon urged their fellow residents to take up the offer of the vaccination when their turn comes.

Archie Conroy, of Paisley, said: “I didn’t feel a thing! Getting vaccinated is the only way we’ll get out of the pandemic and get things back to being more normal than they are just now.”

And John Steele, also of Paisley, added: “When you think about all the deaths that have been happening, if people are offered the vaccine they should definitely take it.”

When you become eligible for an appointment the NHS will write to you directly with details of the location, date and time. Please be patient – do not turn up without an appointment.

Free parking is available at each site. All three have good public transport links but if you need extra help to plan your public transport journey you can visit SPT’s website or call the free Traveline Scotland helpline on 0141 465 1878.

If you have a mobility issue, you can use SPT's bookable, door-to-door MyBus service by calling 0345 128 4025, although advance booking is recommended.

The advice for anyone coming along is to wear a face covering, bring your appointment letter, arrive as close to your appointment time as possible, and wear loose-fitting clothing you can easily remove your arm from.

More information on the local centres is at www.renfrewshire.gov.uk/coronavirus-vaccinations and more info on the vaccine itself is available from the NHS at www.nhsinform.com