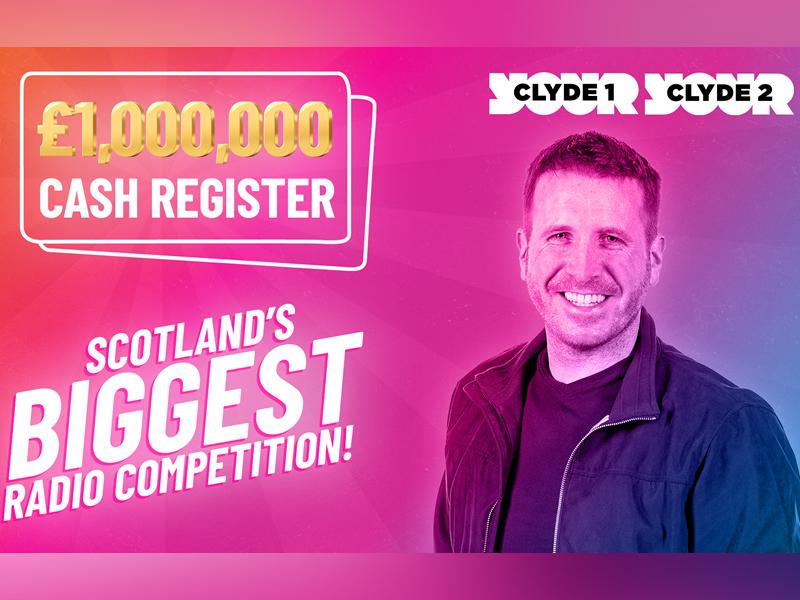 An incredible £1 million prize pot is up for grabs across Scotland and Clyde 1 and Clyde 2 listeners will have their chance to grab their share of the cash, as the hugely popular ‘Cash Register’ returns.

The contest, which is Scotland’s biggest radio competition, launched today (Monday 15th February) and runs every weekday on the Hits Radio and Greatest Hits Radio networks across Scotland*, including the likes of Forth 1, Forth 2, Clyde 1, Clyde 2, West FM and West Sound**.

The popular feature gives out life-changing sums of money to listeners and has been a favourite for a number of years, however, this time the prize pot has reached the £1 million mark.

Every weekday after 8am a new cash amount will be revealed on Bowie at Breakfast on Clyde 1 and on Ewen & Cat At Breakfast on Clyde 2, and listeners can find out how to play. One lucky listener will then get the all-important call back from Garry Spence after 5pm for their chance to win by simply repeating the exact sum on-air.

Cash prizes will be given out across the network until the £1 million prize pot has been emptied. Afternoon presenter on Clyde 1, Garry Spence, is looking forward to sharing the amazing amount of money with his listeners. He said: “Playing Cash Register with listeners is by far my favourite competition – it’s so simple to play yet can impact someone’s lives in a way that’s hard to imagine.

“The best part is telling people they have won – there is no greater feeling, and with £1 million to give away it’s going to feel even better. I know from speaking to listeners that the prizes on Cash Register can quite literally change people’s lives, and after such a challenging year, we all need these feel-good moments more than ever.”

To find out the daily amount and how to play, listen live to Bowie At Breakfast on Clyde 1 and Ewen & Cat In The Morning on Clyde 2 every weekday morning from 6am, and to Afternoons with Garry Spence from 4 – 6pm for the winner ring back.

Keep up with all the latest news, sport, biggest hits and competitions across the Hits Radio and Greatest Hits Radio networks across Scotland on FM, AM, on DAB radio, online, via the station app and on your Smart Speaker.

*Cash Register is a text competition played across all of the Hits Radio & Greatest Hits networks in Scotland and full terms and conditions and online entry can be found at the station website.