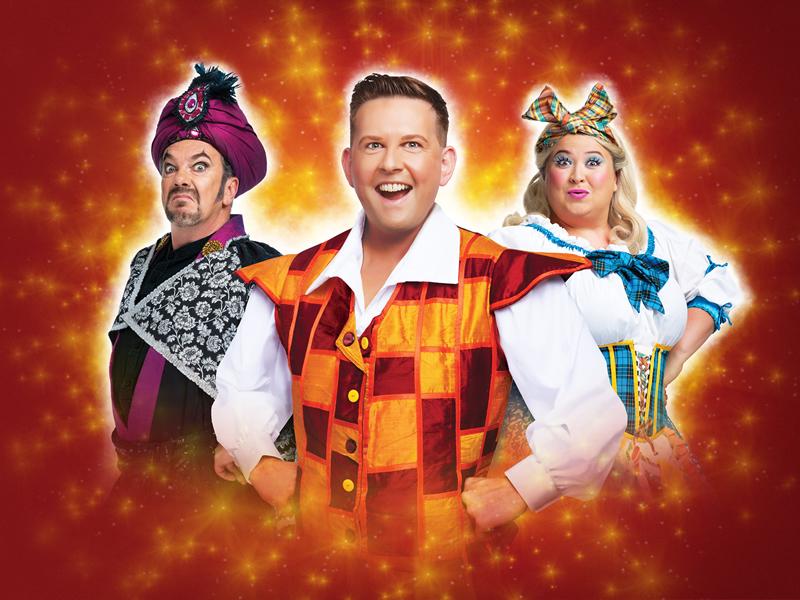 Packed with all the traditional pantomime ingredients SEC audiences know and love, Aladdin will feature laugh out loud comedy, stunning scenery, beautiful costumes and plenty of boos and hisses in a production packed with flying carpets, a wish-granting genie, an evil sorcerer and a plate or two of Gary’s much-loved cheesy pasta.

The creator behind Gary, Scottish-born Greg McHugh, trained at the Royal Scottish Academy of Music and Drama. Alongside writing and starring as Gary: Tank Commander, for which he was nominated for a Scottish BAFTA, he also reprised the role live on stage at The SSE Hydro for three sold out nights. Greg is also well-known for playing Howard in Fresh Meat, Eddie Scott in The A Word and David in Traitors for Channel 4. Gary will be swapping the 104th Royal Tank Regiment for the Armadillo stage, starring in the title role of Aladdin.

Proving he’s “Still Game” for the world of pantomime, Gavin Mitchell stars alongside Greg as the evil Abanazar. Best known as Boaby the barman in the popular sitcom, Gavin has also appeared in Monarch of the Glen, in the sketch show Velvet Soup and the BBC Scotland series Empty.

Joining them as Aladdin’s fabulous mother, Mrs Twankey, will be River City star, comedian and singer Leah MacRae, who also co-starred with Greg McHugh in Gary: Tank Commander. Leah has been a regular on River City for over four years, additionally appearing in episodes of Rab C Nesbitt, Comedy Lab and Two Pints of Lager and a Packet of Crisps. She also starred as Jenny in the BBC sitcom Grownups opposite Sheridan Smith.

The pantomime will once again be produced by Jonathan Kiley for Crossroads Pantomimes. Jonathan said: “We’re absolutely thrilled to be back at the SEC Armadillo this Christmas and have been using the last year to plan for our biggest and best panto yet. Alongside the amazing returning cast we’ll once again be working with special effects company The Twins FX to create a truly memorable experience for our SEC audience.”

Speaking of the cast announcement, Debbie McWilliams, Director of Live Entertainment at the SEC said: “We are so excited to welcome Greg, Gavin and Leah back to the Scottish Event Campus. It’s been a challenging year for everyone, and we can’t wait to see audiences return to the SEC Armadillo for their much-missed dose of family festive cheer. We know we’re in for an extra special, magical and hilarious show!”

Aladdin will be produced by Crossroads Pantomimes, the world’s biggest pantomime producer and the Olivier Award winning team behind the SEC’s festive production.

Running from Saturday 11 December to Wednesday 29 December 2021, audiences should point their magic carpets towards the Clyde and book seats for a high-flying family pantomime adventure.