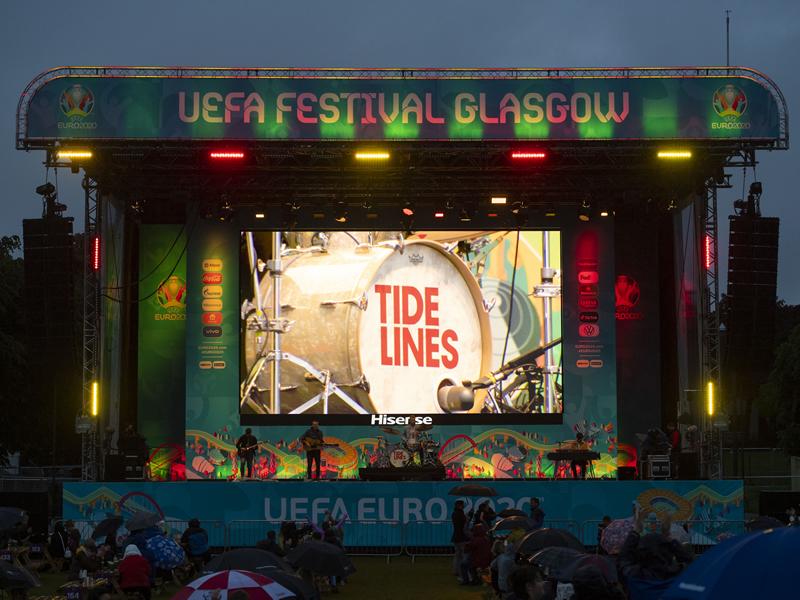 Since opening, the Fan Zone has become a hub of activity, allowing football supporters to soak up the Euros atmosphere in the next best place to the stadium, whilst more than 2,500 youngsters from Glasgow’s schools and community football clubs have taken centre stage on the pitch in the multi sports area.

The summer of sporting fun is set to continue for the youngsters, however now the busy group stage of the tournament is over, there is a change of focus on non-match days to the rebirth of live entertainment in the city. The expansive cultural showcase, with something for all the family, is designed to appeal to a wider audience keen to enjoy the sights, sounds and excitement of live performances once more, whilst benefiting from the COVID secure setting in one of Glasgow’s most beautiful and accessible open spaces.

The North West and North East of Glasgow will have performances on the Green on the afternoon of Friday 2 July while Creative Communities will bring Artists in Residence from the South of Glasgow to the Green in celebration of local communities during the afternoon of Saturday 3 July. On Sunday afternoon Mogwai’s Stuart Braithwaite will spin some tunes from his vinyl collection.

Be Bop Bairns will kick off the final weekend on Friday 9 July with an afternoon of quizzes and musical bingo. Scottish dance company THREE60 will also showcase two pieces over the afternoon of Saturday 10 July while festival favourites Colonel Mustard and the Dijon 5 will close the party on the afternoon of Sunday 11 July ahead of the EURO 2020 final.

The evening programme of events, will showcase Scotland’s diverse cultural scene, with everything from contemporary and traditional music, comedy and drag nights to cinema, dance and family entertainment.

Visitors to the Green in the evening can expect fantastic performances from some of Scotland’s most exciting musicians. Funk soul act Tom McGuire & The Brassholes will join a bill of emerging talent for a paid-for New Music Night on Thursday 8 July.

The evening programme will give visitors a flavour of some of the city’s most-loved festivals, including entertainment from Celtic Connections as well as a night programmed by the Glasgow Jazz Festival. Glasgow Film Festival will present a football-themed movie night showing Gregory’s Girl and Diego Maradona.

Queens on the Green will see a glittery night celebrating Scottish drag as Drag Race UK stars Lawrence Chaney and Ellie Diamond take to the stage alongside a line-up of local drag acts for one of the chargeable events.

Comedy fans can purchase tickets for Funny at the Fan Zone with Fred Macaulay and Friends featuring Chris Forbes.

Little and big ones alike can also make use of the free sporting activities at the Fan Zone’s Family Area, including tennis, mini golf and, of course, football. The sport development facilities are open for the use of those attending the Family Area of the Fan Zone during booked sessions.

Families can enjoy a picnic in the sunshine before the youngsters put their skills to the test on one of the mini pitches against parents and friends.

Councillor David McDonald, Chair of Glasgow Life and Depute Leader of Glasgow City Council, said: “Glasgow Green is one of the city’s most-treasured green spaces and has long been a place for Glaswegians to gather safely to celebrate and enjoy live entertainment. This summer, the space plays host to a vibrant cultural programme of largely free events as part of the Euros.

“While the football has come to a close at Hampden, there’s still time to soak up the atmosphere at the Fan Zone and enjoy an afternoon or evening of family entertainment, live music and comedy from a breadth of talented performers from across Scotland’s dynamic cultural scene.”

Cultural events at the Fan Zone are viewable only from the Food & Beverage Garden area, are subject to relevant physical distancing requirements and must be booked in advance.