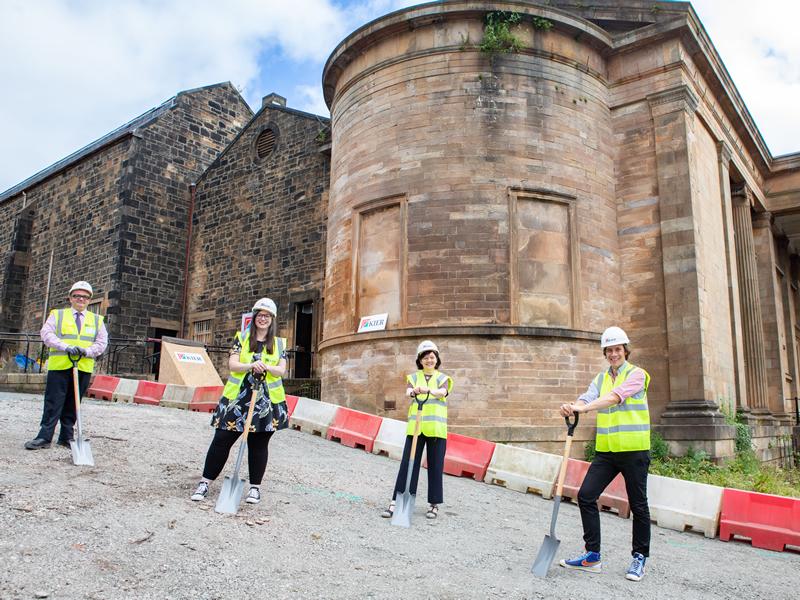 Kier is delivering the main works phase on the campus which includes two grade A listed buildings, including Scotland’s first public Observatory. Construction is likely to be completed by late 2022, with the museum reopening to the public in 2023.

This marks a significant step forward in the Paisley Museum Reimagined project - the signature project in Paisley’s radical regeneration which also includes the £22million refurbishment of the town’s A-listed Town Hall and a new learning and cultural hub housing library services on the town’s High Street.

The project will see the overall museum campus grow by 20 per cent delivering a 27 per cent increase in public space and 26 per cent increase in gallery space, allowing for Paisley’s internationally-significant collections to be re-interpreted and the number of objects on display to be more than doubled.

The Garden Gallery, which will be located in a new-build extension housing an accessible visitor reception and café, will deliver a true ‘wow’ moment for visitors with spectacular views and a unique social space connecting the Museum with the outdoor landscape. New images of the Museum’s Garden Gallery and exterior have been released to coincide with the start of construction.

As part of the redevelopment, there will be two dedicated learning spaces, a makers’ space and a revamped heritage centre which will introduce users to its key resources in an engaging way, encouraging interaction, research and participation. Other notable additions to the campus include new facilities such as a revitalised shop, multifaith prayer room, improved access with new lifts and a public courtyard. There will also be a museum café with capacity for 60 covers providing a social space for families, groups and individuals to enjoy. A picnic area will also be located close by.

The museum transformation project is an important part of Paisley’s economic recovery from lockdown, both in terms of the on-site activity that will take place during construction and the increased footfall that will follow when the museum reopens to the public. When Paisley Museum opens its doors, it is expected to attract 128,000 visitors each year from Scotland, the UK and overseas and provide a £79million economic boost to the area over the next 30 years.

Councillor Lisa-Marie Hughes, chair of Renfrewshire Leisure, said: “The beginning of work on site is a major step forward in our journey to transform Paisley Museum into a world-class destination, bringing in visitors from across Scotland, the UK and abroad.

“The project is part of a wider investment by the council in Paisley’s venues to transform the town centre and take the work already done to make the town a key cultural destination within Scotland to a new level.

“The project team have already worked with hundreds of local people and groups to capture their stories. And we will continue to work with neighbours and surrounding businesses to make sure they are involved throughout the project and are ready to benefit from the massive boost this will bring to the town.”

Architects AL_A have radically reimagined the museum and its campus, reshaping it into a cultural hub of discovery, skills development, creativity and innovation. Working with an international team, including exhibition designers Opera Amsterdam, their design will allow the number of objects on display to be increased by 150%.

Matthew Wilkinson, Project Lead for AL_A, said: “The new museum will have a profound impact on Paisley’s future and it’s testament to the commitment and hard work of the whole community that we’ve reached this point. We’re extremely excited to be starting construction at Paisley Museum and to see our ambitious proposals coming to life.”

Kier have worked on a number of high-profile heritage construction projects throughout the UK and are currently helping to deliver the refurbishment of The Burrell Collection in Glasgow.

Phil McDowell, regional director for Kier Regional Building North & Scotland, states: “We know that Paisley museum is important to the local community as well as being a significant cultural destination in Scotland and we are delighted to start on site to expand and transform the building.
Over the duration of the project, we will work collaboratively with Renfrewshire Council and local supply chain partners to deliver this project. As part of our commitment to leaving lasting legacies in areas in which we build, we will also be providing job, training and apprenticeship opportunities.”

The museum’s final phase of fundraising is now under way, with the museum website reimagined.paisleymuseum.org showcasing the project’s ambitious vision.