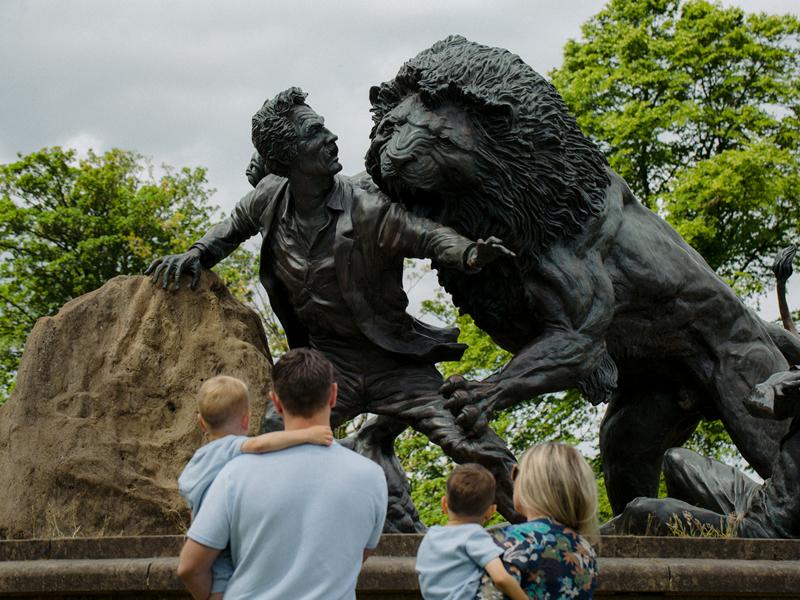 The project was made possible by The National Lottery Heritage Fund, Scottish Government, Historic Environment Scotland and South Lanarkshire Council.

Home to the UK’s most famous Victorian explorer, missionary and abolitionist of the 19th century, the David Livingstone Birthplace Museum has been redesigned to follow Livingstone’s life from birth to death alongside new exhibits that focus on the 21st century legacy of Livingstone within the context of Scotland’s role in slavery and colonisation.

Through key objects in the collection and interactives, the stories of the African men and women in Livingstone’s crew will be featured for the first time as part of the Museum’s new exhibition. The display aims to highlight marginalised histories relating to Livingstone’s story and present the interconnected role of Livingstone’s crew in the success of his explorations, the return of his body after his death and his ongoing legacy.

The new interpretation will reflect current scholarship on Livingstone as well as the extensive written testimony left in his journals, to dispel the long-standing hero image of Livingstone as a lone explorer, a perspective that was furthered by biographers after his death.

Grant MacKenzie, Director of David Livingstone Birthplace said: “Our doors have been closed for four years and we are thrilled to welcome back visitors. We hope that through the transformation of David Livingstone Birthplace, visitors will come away with a new understanding of his achievements, his failures, and the opportunity that his story holds to encourage a deeper understanding of marginalised histories and Scotlands's role in slavery and colonisation.”

The Museum will feature a dedicated new display to Livingstone’s leading crew members from Southern Africa, Abdullah Susi who was from today’s Mozambique and James Chuma, from today’s Malawi. Also presented will be the diary of Jacob Wainwright, born near Lake Nyasa in East Africa, the youthful and highly literate crew member who played a prominent role in Livingstone’s story and particularly his death, being instrumental in helping to transport Livingstone’s body and possessions back to the UK. Alongside these individual stories, the Museum will examine the wider roles and responsibilities of Livingstone’s extensive crew in his many missions.

A key feature is the Legacy room in the exhibition, which presents the impact Livingstone continues to have on the Sub-Saharan countries that he visited in his lifetime. A series of talking head interviews with individuals from Zambia, Zimbabwe, Malawi and Scotland, created in partnership with Scotland Malawi Partnership (SMP) is featured.

Another highlight will be the newly restored Pilkington Jackson Tableaux. These eight unique polychromatic plaster sculptures depict scenes from David Livingstone’s life and journeys in Southern and Central Africa.The work was created by prominent 20th Century British sculptor Charles d’Orville Pilkington Jackson in the 1920s. The pieces were commissioned in 1927 after the Executive Committee of the Scottish National Memorial to David Livingstone was established to honour his memory as well as secure the site of his birth in Blantyre.

Tales from the Tableaux is a new exhibit that will feature alongside these conserved sculptures. Working with Zimbabwean author and Livingstone scholar, Petina Gappah and Mallard Productions in Glasgow, a series of new animations bring the Tableaux to life. While the sculptures draw on imagery typical to the era in which they were created and perpetuate the myth of Livingstone as a lone explorer, the animations now bring hidden histories to the fore. Among those brought to life by the animation are Motshipi, one of the wives of Chief Sechele I of the BaKwena, Mary Livingstone, Paulo Molehane, James Chuma and Mjakazi. The animations were commissioned to complement the wider exhibition, highlighting the contribution of the men and women that aided Livingstone’s expeditions as well as allowing those affected by the activities of the missionaries, the East African Slave Trade and European colonisation to share their stories.

To find out more about the David Livingstone Birthplace visit www.david-livingstone-birthplace.org