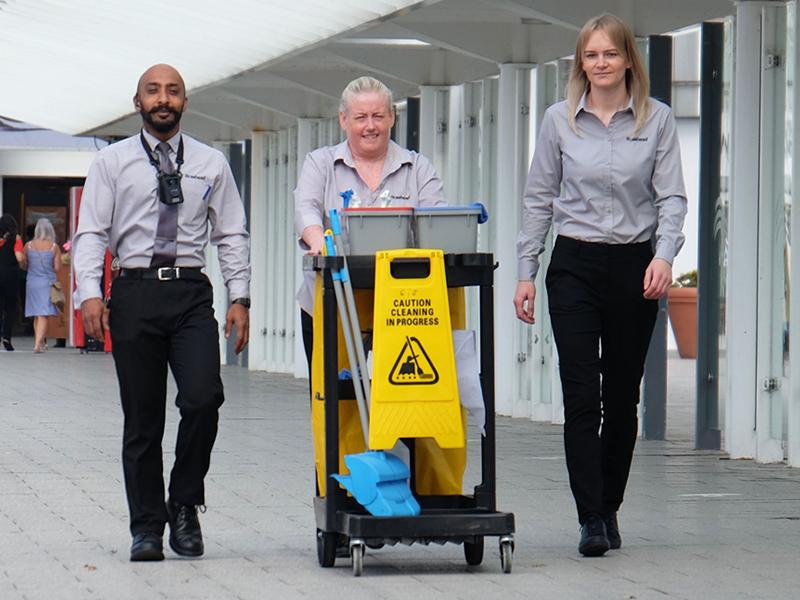 Security and cleaning staff at the Braehead Centre have issued a message to anyone looking for a job: “Come and join us – this is a great place to work.”

A recruitment drive has been launched and two special events for anyone interested in working at Braehead are being held in the marketing suite, on the top floor of the centre, between 5pm and 8pm on Monday, September 20 and 1pm and 4pm on Wednesday, September 22.

Staff already employed at Braehead yesterday told how much they enjoy working at the mall and encouraged people who are looking for a job, or fancy a career change to apply for one of almost a dozen positions currently available.

Almost six years ago, Louise Reynolds was a hairdresser, but wanted a change of career. She got a job as a security officer at Braehead and since then has been put through various training courses and promoted to security co-ordinator.

Louise says: “Working at Braehead is more than just a job – it’s like we’re all a family here.

“If you want to improve yourself and move up the career ladder, the company will invest in you with all kinds of training.”

Margaret Tazzar is an environmental co-ordinator at Braehead with responsibility for organising the cleaning staff at the mall. She’s worked at Braehead since it opened 22 years ago and says:

“I love my job and every day is different. There’s a great team working here and the morale and the banter between us is really good.”

Hasham Shazad has been a member of the security staff for the past two years. “This is a great working environment and the job certainly keeps you fit and active.

“I get a lot of job satisfaction being able to help people. A lot of visitors to Braehead are regulars and you get to know them. It certainly makes your day when people come up to you and ask how you are doing.”

Braehead’s Security and Environmental Manager, Paul-Scott Wiggins said: “The aim of our recruitment events is to allow people to drop in and discuss the roles, duties and benefits with the centre’s team leaders in a more casual setting as opposed to a formal interview.

“We’re looking forward to meeting everyone who would like to come and work at Braehead and we’ll answer any questions they have about the jobs available.”

Anyone wishing to contact Braehead before or after the recruitment events directly can send an email to braehead.information@savillspm.co.uk or call 0141 885 1441.