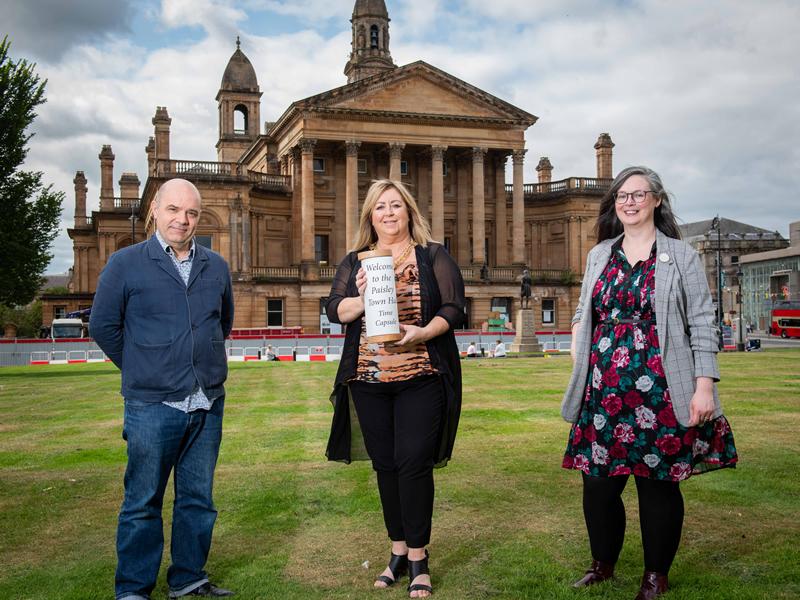 The striking Victorian-era town hall – part of the legacy of Paisley’s proud past at the centre of the world’s textile industry – is undergoing a major redevelopment to preserve it for future generations.

The project is part of a wider investment by Renfrewshire Council in Paisley’s cultural venues aimed at driving new footfall to the town, including the work to turn Paisley Museum into a world-class visitor destination, retelling the unique stories of the town’s people, Pattern, and more.

Local artist and filmmaker, Kevin Cameron, worked with residents, local schools, and former employees of Paisley Town Hall to collect stories and memories of activities and events that have taken place at the venue.

Inside the time capsule, the memories are contained within a scroll consisting of over 30 pages that can be unravelled, read and easily displayed. The scroll is wrapped around a bobbin as a symbol of the town’s thread-making heritage.

Paisley Town Hall has been a unique landmark at the heart of life in the town since 1884, having been gifted to the town by Sir George Clark, owner of one of the firms which at that time had made the town a global thread-making hub.

Building contractors Morrison Construction are currently on site, with work due to finish in late 2022 and the building due to reopen in early 2023.

Councillor Lisa-Marie Hughes, chair of Renfrewshire Leisure Ltd, which will operate the reopened building, said: “Everyone in Paisley will have their own special memories of the town hall and I’m delighted that we have been able to preserve some of those to be shared with future generations.

“The town hall is a key project within the council’s wider investment in the town aimed at using Paisley’s internationally-significant cultural and heritage offer to change its future.

“Once reopened the town hall will build on the work already done to make Paisley one of Scotland’s key destinations for heritage, culture and events - driving new footfall and visitors to the town centre, day and night, and helping the local economy build back from the effects of the pandemic.

“We look forward to helping people make memories at Paisley Town Hall for many years to come.”

Provost of Renfrewshire, Lorraine Cameron, who added a letter for future generations to the time capsule, said: “Paisley Town Hall is special to so many people and it was important to involve the local community.

“At a time where our lives are still disrupted due to the Covid-19 pandemic and normal events have been unable to take place as planned, the creation of the time capsule has given many people a chance to look back on some of those times they hold most dear.

“I am honoured to be asked as Provost of Renfrewshire to contribute a letter and share my hopes for a future Paisley with generations still to come.”

The town hall redevelopment will deliver:
• preservation of its unique 19th-century architectural features while adding 21st-century performance facilities, guaranteeing the building’s long-term future;
• the capacity of the main hall expanded to 1,200, allowing the venue to host bigger and better events and help make the town a stop-off on musical tour schedules;
• entirely new rooms created within currently-unused spaces, including a café-bar, dance studio, and screening room, widening the building’s range of uses;
• new performance facilities, a much-improved audience experience, and a complete replacement of the venue’s electrical and mechanical systems;

To be kept up to date on the use of the building when it reopens, register your interest with Renfrewshire Leisure via https://mailchi.mp/renfrewshireleisure/paisleytownhall

The town hall redevelopment is part of a wider investment by the council in Paisley’s venues and outdoor spaces. Projects due to complete over the next couple of years also include:

• the £42m project to transform Paisley Museum, expected to help drive 128,000 visitors a year, to see the town’s internationally-significant collections;
• a new modern home for library services within the Paisley Learning and Cultural Hub, currently being built in a vacant former retail unit on the town’s High Street;
• work to upgrade Paisley Arts Centre;
• a redesign of Abbey Close to create an expanded outdoor events space set against Paisley’s town hall and 12th-century Abbey, plus work to turn County Square into an attractive hub for small events and provide a welcome showcase for larger events, festivals and attractions in the town.

More information is at www.renfrewshire.gov.uk/PaisleyTownHall