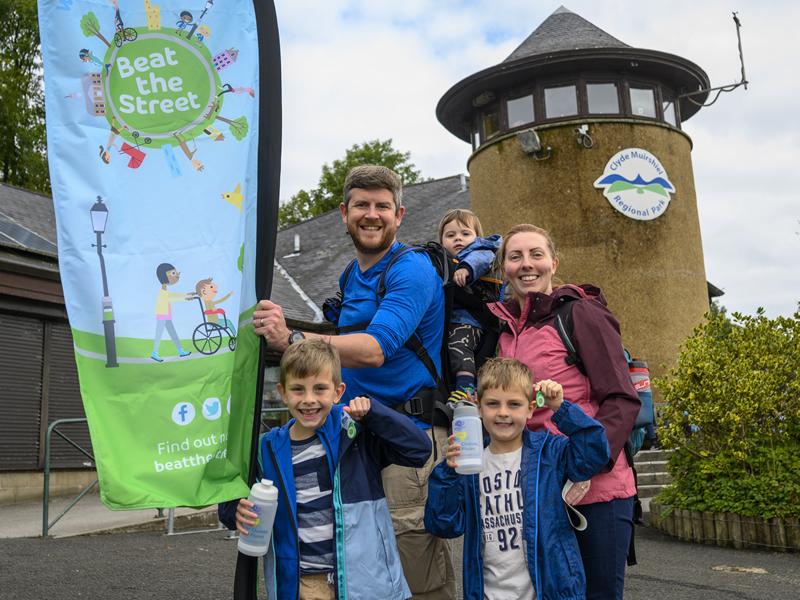 The free, interactive game is currently taking place across the towns and villages of Bridge of Weir, Elderslie, Houston, Howwood, Kilbarchan, Linwood, Johnstone and Lochwinnoch and encourages local people to move more and to get active.

More than 5,100 people have signed up to take part and have together clocked up almost 15,000 miles!

There are leaderboards for schools, community teams and workplaces, and players can also help raise money for MND Scotland with every mile they clock up. Each leaderboard is divided into total and average points to ensure that smaller teams are in with an equal chance of winning.

Currently, Fordbank Primary School is at the top of the total and average points leaderboard but it’s very close!

Players walk, wheel, scoot, cycle, wheel or run between the Beat Boxes which are spaced approximately half a mile apart – hovering their fobs or cards over the Beat Boxes to score points, and the further players travel, the more points they score for their community or school team.

This week is Go Explore and players are being encouraged to visit the area’s heritage sites where there will be bonus points on certain Beat Boxes.

Councillor Cathy McEwan, Convener of Renfrewshire Council’s Infrastructure, Land and Environment Policy Board, said: “We’re off to a great start with Beat the Street, but there’s still time to join in and get those steps in.

“Now that you’ve got to grips with the way the game works, why not venture a little further afield and really get to explore the areas in the game and try out new routes for your evening walk or commute to work or school.”

Beat the Street started in the eight areas of Renfrewshire on Wednesday 15 September and takes place until 27 October.

As well as helping people create healthier lifestyle habits, it also helps with air quality, congestion and pollution, and connects people to their communities and green spaces.

Beat the Street Renfrewshire has been commissioned by Renfrewshire Council in partnership with Renfrewshire Leisure and is funded by The Scottish Government’s Smarter Choices, Smarter Places programme, administered by Paths for All. It is being delivered by Intelligent Health.

More information will be available at www.beatthestreet.me/renfrewshire and on social media @RenfrewshireBTS