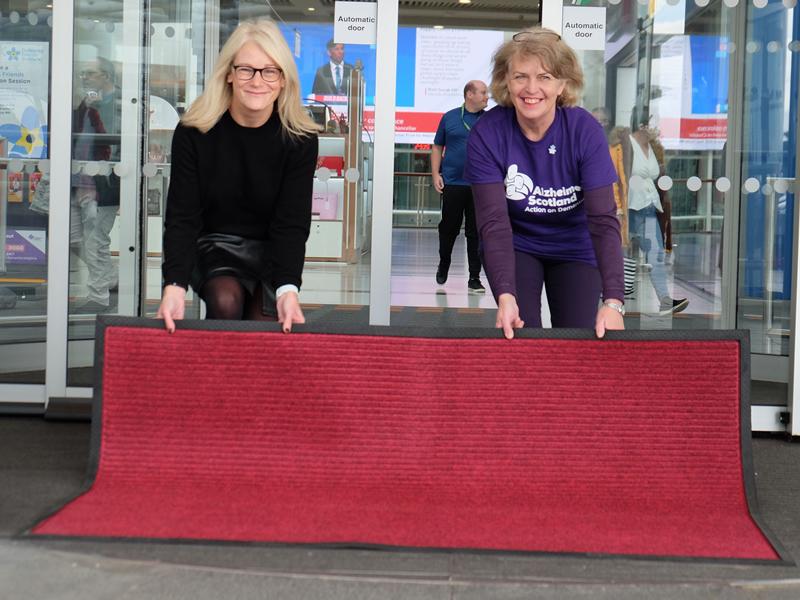 Staff at the shopping and leisure destination have been trained by the charity as Dementia Friends, so they can make life easier and more comfortable for people living with dementia when they visit the centre.

The team running the Braehead Centre have also placed coloured mats at the mall’s entrances instead of black mats, as they can appear as a hole in the ground to someone with dementia.

The Alzheimer Scotland Purple Alert app has been downloaded on to staff phones and linked to the Braehead Centre’s control room, as a vital tool in finding someone with dementia who is lost.

And one modern wash hand basin tap in each toilet has been replaced with a traditional pillar tap, as it is more recognisable to someone with dementia. Signage in the centre has also been placed at eye level.

Staff from Alzheimer Scotland were given free mall space at Braehead every day last week between Monday, October 4 and Friday, October 8 to let people know about the many services they provide and how they can help people with dementia, their carers and families.

Dementia awareness-raising sessions were hosted by Anne McWhinnie, from Alzheimer Scotland in the mall’s central atrium every day.

Anne said: “Hats off to Braehead for everything they are doing and being hugely supportive. They are now officially the first Dementia Friendly Shopping Centre in Scotland.

“We’re really excited about what Braehead is doing for us and it’s fantastic. A recent survey we carried out showed that people living with dementia still want to go shopping and Braehead will give them a positive experience when they visit the centre.”

“And we’ll do all we can to make sure people with dementia can enjoy the shops, cafes and restaurants like everyone else does.

“The staff have enjoyed their training from Alzheimer Scotland gaining more awareness of what they can do to make life easier for people with dementia, their carers, families and friends when they come to Braehead.”