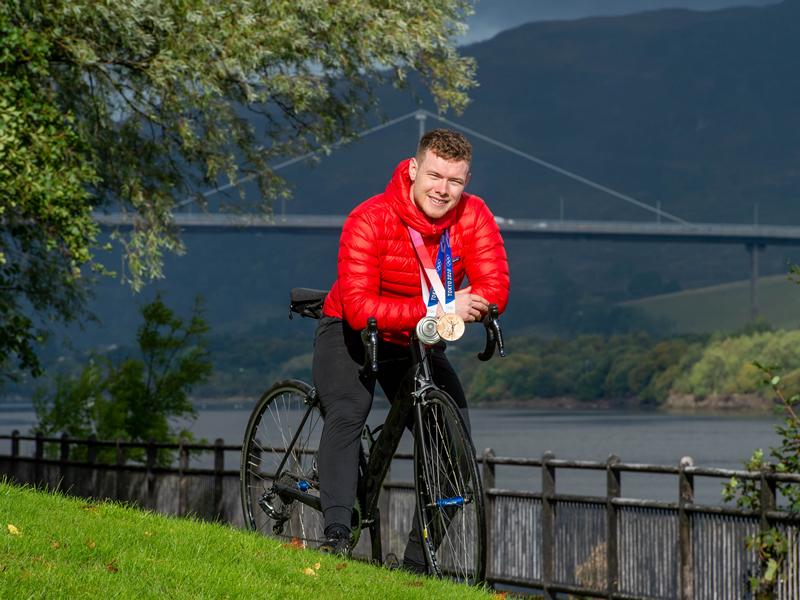 Having honed his talents on the cycle routes of Renfrewshire, Jack Carlin hopes to inspire a peloton of cyclists to follow in his footsteps after winning silver and bronze at the Tokyo Olympic Games this summer.

Born and brought up in Paisley, Jack spent his younger years as a footballer but after an injury put him into the saddle as part of his recovery, football soon became a distant memory.

Using Renfrewshire’s many safe cycle routes, Jack developed his love of cycling and now, thanks to Renfrewshire Council’s new #YouDecide campaign, Jack hopes to inspire the next generation of cyclists and support those who just love getting out on their bikes.

Jack said: “I’ve been using the cycle routes around Renfrewshire since I was young and it’s on them that my love of cycling really started to develop and I believe it’s so important that all cyclists have the opportunity to get out on their bikes.

“Obviously in my case, it has led to a career and ultimately competing at the Olympics, but it’s so important that people of all ages have the chance to cycle safely around where they live ad enjoy cycling for what it brings to their physical and mental health.

“It’s great that this new campaign will give people the chance to put forward improvements to their local cycle route or even suggest new ones and I’d encourage everyone to get involved - it’s our chance to have our say and make a positive difference to our local area.”

The #YouDecide campaign is the first Community Choices project of its kind undertaken by Renfrewshire Council and gives the community the chance to decide how part of the Council’s budget is spent.

A total of £1.2million has been allocated to the campaign from the Council’s Environment and Infrastructure budget and ideas are being sought for possible infrastructure upgrades in Renfrewshire, such as road safety initiatives, new walking or cycling routes, park upgrades or outdoor gym equipment.

The ideas process open until Sunday 14 November 2021 and can be submitted online at www.renfrewshire.gov.uk/YouDecide or via post boxes placed in libraries, leisure centres and Morrisons supermarkets across Renfrewshire.

Officers will carry out a feasibility study on each idea and, once complete, a shortlist of all viable projects will be put to a public vote in early 2022.

Local people will then have the chance to choose the ones they’d like to see completed in their area, with the Council carrying out the work on the successful projects.

Councillor Michelle Campbell, Depute Convener of Renfrewshire Council’s Infrastructure, Land and Environment Policy Board, said: “It was incredible to see Jack’s success at this summer’s Olympics, especially knowing that he’d started his journey here in Renfrewshire.

“We’re want to ensure people are able to cycle safely throughout Renfrewshire and it just goes to show the importance of providing safe cycle routes as we may be inspiring the next Olympic athlete for Team GB.

“A new cycle route is just one possible idea though that you can submit as part of the #YouDecide campaign and we want as many and as wide a range of ideas as possible so, if there’s an infrastructure improvement that you would like completed in your area then submit it to us now.

“This is another chance for the Council and the community to work together to make Renfrewshire a better place to live, work and visit so don’t miss your chance to have your say.”

For more information and to submit an idea, visit www.renfrewshire.gov.uk/YouDecide