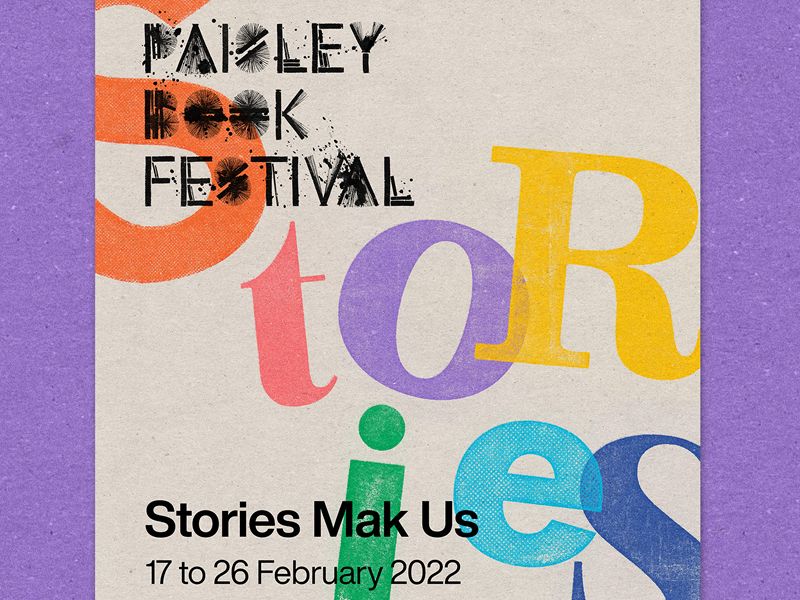 It’s a programme filled with workshops, author events, book launches and opportunities for both established and emerging writers to showcase their work on the international stage. Next year has been designated Scotland’s Year of Stories and this exciting programme of live and online events showcases literature inspired by or written in Scotland.

Check out the full programme here >>

The theme this year ‘Stories Mak Us’ encourages discussions on a range of topics, from storytelling and Scots/Gaelic events, to thinking about how fiction has helped us through the pandemic. More broadly it looks at how narratives shape us in all sorts of ways – personal and political.

Mara Menzies and Harry Josephine Giles were appointed as guest curators to oversee strands of the programme. Giles leads on Minding Language, a series of events about poetry in these islands that unsettles the languages we use involving writers such as Shetland poet Roseanne Watt and Ted Hughes Award winner Raymond Antrobus while Menzies’ The Power of Storytelling explores the joy and the power of storytelling in our lives, and the drive to constantly find new ways to tell our stories and pass them on to future generations.

Programme highlights include master of Scottish storytelling James Robertson bringing his latest novel News of the Dead, a ghost story set in the Scottish glens. Glasgow-based novelist Louise Welsh brings the long awaited sequel to The Cutting Room after 20 years The Second Cut. Denise Mina retells one of the most famous stories from Scottish history in her new book Rizzio, the tale of Private Secretary David Rizzio, who was murdered in Mary Queen of Scots’ private chambers. Scottish Makar Kathleen Jamie reads from her latest work and shares what the first six months in the job have been like in What Maks A Makar. C. J. Cooke and Jenni Fagan explore their latest books on the history of witches in Scotland in an event chaired by host of the Witches of Scotland podcast, Zoe Venditozzi. Booker-prize shortlisted author (His Bloody Project), Graeme Macrae Burnet brings his new novel Case Study. Malika’s Poetry Kitchen bring poets Jacob Sam La Rose and Dorothea Smartt to present their new collection in Too Young, Too Loud, Too Different in an event chaired by editor Maisie Lawrence.

Stories of Resistance features two of South America’s top writers Diamela Eltit and Julián Fuks, and is chaired by their English translator Daniel Hahn. Both artists are published by Edinburgh-based Charco Press.

The Paisley Book Festival also partners with Chamber Music Scotland to showcase a brand new project – Songs from the Last Page – which will include a songwriting workshop and a new concert of songs inspired by the last lines of books.

Oot and Aboot in Paisley is a partnership event with Lapidus Scotland that takes inspiration from the words found in Paisley to make new creative work.

Publishing Scotland curates an event with authors Anne Pia and Mick Kitson alongside their editors to discuss the vital relationship between author and editor.

Family events include a drop-in Tiny Listening Lounge in Paisley Central Library, a book launch for Ross Mackay’s new picture book and a puppet show in Gaelic to celebrate the launch of Cora – Gaisgeach nan Gràineag with Theatre Gu Leòr. There will also be a Bookie Boogie Brunch with songs and stories for all ages.

We believe we have something for everyone and look forward to welcoming you virtually or face to face!

The Paisley Book Festival is supported by Future Paisley, the wide-ranging programme of events, activity and investment using Paisley’s unique and internationally significant cultural stories to transform its future. It is delivered by Renfrewshire Leisure and funded by Renfrewshire Council. Bookshop.org will be the official online bookselling partner for the Festival for the second year running.