The exceptional talent within Scotland's burgeoning jazz scene was celebrated at the 9th Scottish Jazz Awards. 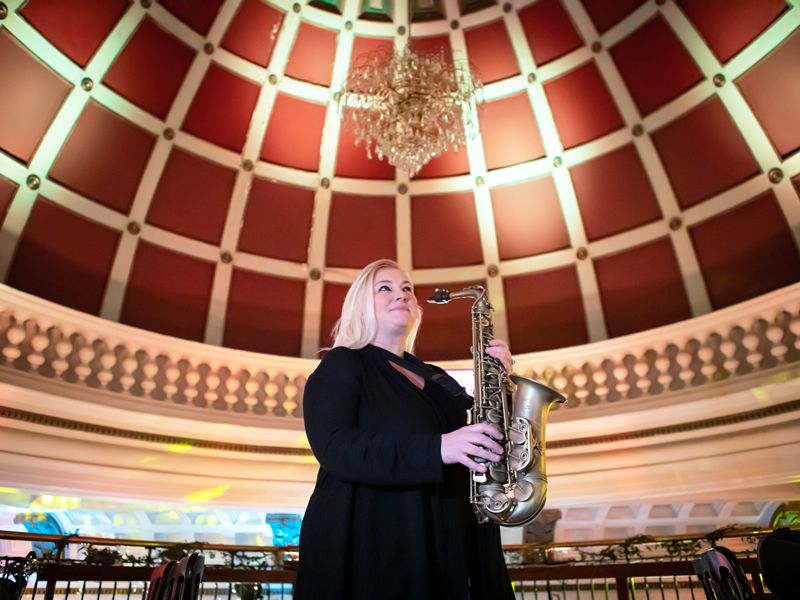 Winners across seven categories, including Best Vocalist, Best Band and Rising Star, were honoured at Glasgow venue The Savings Bank as the event applauded stand out musical endeavours.

More than 2,000 public votes were cast for the nominees, while the Services To Scottish Jazz and Lifetime Achievement Awards were selected by a panel of industry specialists, including press and promoters from across the UK.

Winners of the 9th Scottish Jazz Awards are:

It’s been an exciting year for the Scottish jazz community. Despite the challenges of the pandemic, 2019's Rising Star winner and this year’s Best Vocalist Marianne McGregor released her self-penned debut album Good Morning Warning, followed by a second release Standards covering her favourite jazz tracks.

Best Instrumentalist winner, saxophonist and teacher Laura Macdonald had an equally busy year playing concerts and jazz festivals across the country while also competing in BBC’s MasterChef, making it to the final four in the popular cookery competition.

Glasgow saxophonist Rachel Duns has gained experience playing jazz as a member of various youth bands including the National Youth Jazz Orchestra of Scotland, which contributed to her gaining a place studying jazz at the Royal Conservatoire of Scotland, and has now earned her the title of Rising Star.

Best Band winners Rose Room have become one of Scotland’s leading ensembles with their 1930s ‘Hot Club’ standards, gypsy jazz favourites and self-penned originals. The quartet, who recently celebrated 10 years together, is fronted by violinist and vocalist Seonaid Aitken, who hosted the ceremony, alongside Jimmy Moon, Tam Gallagher and Conor Smith.

Jazz vocalist Georgia Cecile’s debut album Only the Lover Sings was released to great critical acclaim and praise from fans, reaching the top 10 of the UK jazz charts and has now picked up the prestigious Best Album Award.

Lindsay Robertson of the SNJO was honoured with the Services to Scottish Jazz Award in recognition of her many years managing the orchestra, as well as her work with Edinburgh Jazz Festival and Jazz From Scotland before her retirement.

Acclaimed pianist Richard Michael was presented with the Lifetime Achievement Award for his varied career including his pioneering work with Fife Youth Jazz Orchestra where he has been influential in the development of many of Scotland’s finest musicians such as Calum Gourlay, Helena Kay, Fergus McCreadie and Kim Macari.

A popular broadcaster on BBC Radio Scotland’s Jazz Nights show since 2007, he has revealed to thousands of listeners the secrets of the jazz masters in his role as “Jazz Jargonbuster”. He is Honorary Professor of Jazz Piano at the University of St Andrews and spent many years spent as Head of Music in Beath High School. He joins previous winners Martin Taylor, Fionna Duncan, Carol Kidd, Ken Mathieson, Bobby Wellins, Tam White and Ronnie Rae in the Jazz Hall of Fame.

Jill Rodger, Director of Glasgow Jazz Festival and Producer of the Scottish Jazz Awards, said: “It’s been a wonderful year for jazz music in Scotland despite the challenges and it’s been inspiring to see the new heights reached and boundaries pushed within the scene. I’d like to congratulate all of our nominees and winners on their recognition at this year’s Scottish Jazz Awards - they are all fantastic ambassadors for Scottish jazz and it is inspiring to see so many women picking up trophies across the board this year.”

Alan Morrison, Head of Music at Creative Scotland: “Congratulations to all the 2021 Scottish Jazz Awards nominees and winners. This year’s awards highlight the increasing diversity of the Scottish jazz scene and how dedicated teachers and organisers play a vital role in its success. The winners in each and every category have produced outstanding artistic work that has clearly connected with audiences.”

The Scottish Jazz Awards are produced as an independent event by the organisers of Glasgow Jazz Festival and supported by the National Lottery through Creative Scotland.