The Red Hot Chilli Pipers and the Royal Scots Dragoon Guards Pipes and Drums have released a stunning rendition of the tune 'The Heroes of St Valery' with proceeds going to charity. 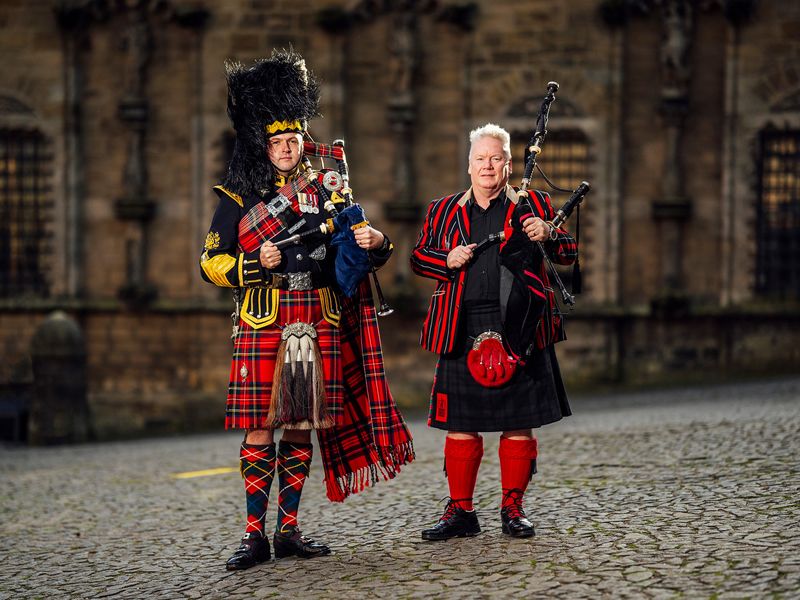 This unique collaboration features a powerful and evocative narration by Brigadier Sir Melville Jameson KCVO CBE CStJ that describes the battle of St Valery in France in June 1940 and the bravery of the men of the 51st Highland Division fighting against overwhelming odds. The single also ends with a bagpipe solo by Captain Stuart Samson MBE, former director of The Army School of Bagpipe Music.

The single, the brainchild of Willie Armstrong of The Red Hot Chilli Pipers, has been released to raise much needed funds for The Royal British Legion Scotland and Poppyscotland.

Willie Armstrong explains how the collaboration came about: “I played the tune last year to commemorate the 80th anniversary of The Battle of St Valery. The tune was written by Pipe Major (P/M) Donald Maclean who was taken prisoner at St Valery in June 1940.

“I had an idea that we should do something to celebrate the centenary year of The Royal British Legion Scotland and Poppyscotland. I thought we could release some music and give all the money to the charities; the most fitting tune would therefore be The Heroes of St Valery.”

After speaking with Cameron Barnes, he said: “We should involve the most famous pipe band in the world – The Royal Scots Dragoon Guards – and contacted their P/M Ben Duncan who got the ball rolling at their end. Although I could have asked a civilian pipe band – one of the many top grade ones that some Red Hot Chilli Pipers members currently play in; I thought it would be more appropriate to have the very best military pipe band as the charities we’ll be donating to are there to support military personnel – both serving and retired.”

Sir Melville Jameson KCVO CBE CStJ, who narrates on the track and who has previously commanded both The Royal Scots Dragoon Guards and the 51st Highland Brigade, comments on why this is such an important recording.

“It is a great honour to be part of this very special recording of that wonderful tune “The Heroes of St Valery” composed in Prisoner of War Camp by Pipe Major Donald MacLean of Lewis and The Seaforth Highlanders.

“I find it intensely moving and it reminds me of the motto of those gallant soldiers of The 51st Highland Division ‘Friends are good on the day of battle’.

“All the proceeds will go to support The Royal British Legion Scotland and Poppyscotland in their centenary year - Please give it your full support.”

Lieutenant General Sir Alistair Irwin KCB CBE, son of a St Valery survivor and President of the Royal British Legion Scotland and Poppyscotland said: “As President of both the Royal British Legion Scotland and Poppyscotland, and as the son of one of those “Heroes of St Valery”, I salute this brilliant new version of a famous tune composed with much emotion under the grim conditions of a German PoW camp over 80 years ago. I salute all those involved in creating this memorable recording and in particular, I salute their generosity in committing the proceeds of the sales to two charities that play such a vital part in providing comfort and help to veterans in need in Scotland. Those who fought so valiantly at St Valery would be proud to know that they are honoured in this way.”

A spokesperson for Poppyscotland expands on the challenges they face and the valuable support they provide: “The Covid-19 pandemic has hit many in our Armed Forces community especially hard. Veterans were already particularly susceptible to social isolation and loneliness before lockdown hit, but leading charities Poppyscotland and Legion Scotland have been at the forefront throughout the pandemic.

“Poppyscotland made more than 9000 proactive calls to the most vulnerable veterans, ensuring that while many face-to-face services ceased, they were not forgotten. Poppyscotland’s popular drop-in groups moved online and proved a lifeline to many, and their wider programme of welfare support has continued uninterrupted throughout.

“As restrictions started to lift, Legion Scotland’s veterans’ community support service has played a vital role in rekindling camaraderie between members of the Armed Forces community, both on a one-to-one basis at home and also through organising day trips and breaks.

“Despite this, many more in our Armed Forces community still need help and that is why the money raised for the single is so important. Only through the continued support of the public can these great charities continue their life-changing work. Their services are needed now more than ever.”

A spokesperson for The Royal British Legion Scotland talks about the crucial work they undertake and the challenges they also face: “2021 has been a significant year in the history of The Royal British Legion Scotland (Legion Scotland) as they launched their centenary commemorations in June. The Legion has been providing support and comradeship to veterans for the last 100 years, as well as delivering an annual programme of Remembrance and key military commemorations.

“The pandemic has affected all areas of their services, but the membership and volunteers quickly adapted to provide commemorations via a virtual format to ensure veterans remained connected and supported.

“Legion Scotland’s veterans’ community support service has remained active since the first lockdown providing practical support and befriending to veterans and their families. Up and down the country legion members and volunteers were the embodiment of our motto, “Service not Self” ensuring that veterans were supported and had regular points of contact when they needed it most.

“Hardest hit have been Legion Scotland’s network of Branches and Clubs with facilities closed and face-to-face meetings not possible, the last year has seen Legion Scotland lose 18% of their membership and vital income required to continue their work supporting veterans.

“Despite the challenges, the Legion remains a force for good for the Armed Forces Community in Scotland and with fundraising support will be able to continue that work for 100 years more.”

It is hoped, with support of the Scottish media, the public will have the opportunity to listen to and enjoy this fantastic recording and in turn support these great charities in continuing their crucial work. An audio of the single can be listened to here.