National Theatre of Scotland is thrilled to be presenting the world premiere of Orphans, based on the much-loved cult film written and directed by Peter Mullan! 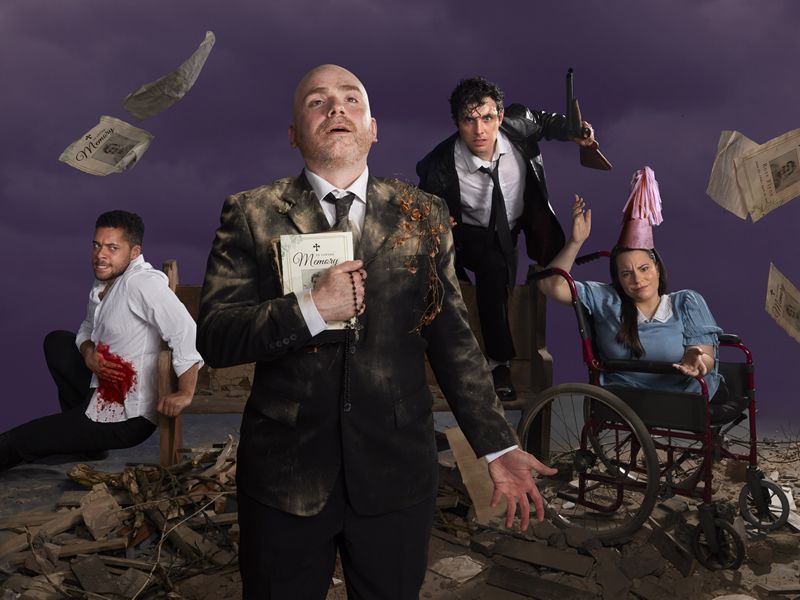 National Theatre of Scotland is thrilled to be presenting the world premiere of Orphans, a darkly comic musical about family, grief and forgiveness, based on the much-loved cult film written and directed by Peter Mullan. Directed for the first time for the stage by award-winning theatre director Cora Bissett, Orphans is a big, bold Scottish musical with raucous and heartfelt songs from Glaswegian composing team Roddy Hart and Tommy Reilly, ingeniously adapted for the stage by playwright Douglas Maxwell.

Orphans is set in the streets of Glasgow and will open at Glasgow’s SEC Armadillo before touring to the King’s Theatre, Edinburgh and Eden Court, Inverness with preview performances at Beacon Arts Centre, Greenock in April 2022. The production signals the welcome return of National Theatre of Scotland live performances to Scotland’s largest theatres.

Set in 1998, Orphans follows the Flynn siblings on a stormy night in Glasgow after the death of their mother. Thomas won’t leave the church, Michael is bleeding and roaming the streets, John has a gun and is set on revenge while Sheila wants to live life on her own terms. But will the siblings survive the night to get to their mother’s funeral?

Orphans (1998) was Peter Mullan’s first feature film, made in Glasgow’s Southside around the streets where he grew up. The award-winning film is now regarded as a cult classic of European cinema and secured Mullan’s career as a writer-director. He went on to write and direct The Magdalene Sisters (2002) and Neds (2010) but is also known for starring roles in television series and films including My Name is Joe, Westworld, Ozark and Mum.

Peter Mullan, writer and director of the Orphans film said: “It’s a brave and ballsy thing to do, to adapt any film and then put it on stage. The story lends itself well to being a musical because, however misplaced, however funny, it’s all about emotion. Orphans is an epic journey through the night. The thing that draws you in is the characters, how they interact and what implications there are for the world that’s around them which combine into a cauldron of craziness and hurt and grief. The idea of putting that to music made sense to me. Oh, and if you f**k it up, you’re on your own, my disclaimer is going in the programme but if it’s good, I’m taking all the credit.”

The stage musical of Orphans is brought to life by a highly talented cast.

Robert Florence makes his musical theatre debut in the role of eldest brother Thomas. Robert is best known to audiences as co-creator and performer in the BBC comedy sketch show Burnistoun and he returns to our screens in 2022 in the second series of The Scotts, a BBC Scotland sitcom starring and written by the Burnistoun creators. Amy Conachan (Sheila) played Courtney Campbell in the Channel 4 soap Hollyoaks and has previously worked with National Theatre of Scotland on Skeleton Wumman for Scenes for Survival; Reuben Joseph (Michael) previously appeared in the National Theatre of Scotland’s musical festive film Rapunzel and has recently appeared in the Almeida Theatre’s Macbeth and in BBC’s Vigil. The final family member John is played by recent graduate Dylan Wood.

Other cast and ensemble members include: Scottish stage stalwart Harry Ward (Tanga) who reunites with Cora Bissett, following his role in Cora’s What Girls Are Made Of; Amber Sylvia Edwards (Carole) who starred as Rapunzel in National Theatre of Scotland’s musical festive film Rapunzel and is currently touring the UK in Dirty Dancing; Louise McCarthy (Mrs Hanson) worked with National Theatre of Scotland in its co-production with Birds of Paradise Theatre Company, My Left Right Foot, is well known as one half of the comedy duo The Dolls and will be co-starring alongside Robert Florence in the second series of BBC Scotland sitcom The Scotts in 2022; John McLarnon (Jacko) who also appeared in My Left Right Foot, Local Hero (Royal Lyceum Theatre and The Old Vic) and recently collaborated on The 3M Mixtape for Dundee Rep; Patricia Panther (Sara), appeared recently in Hannah Lavery’s Lament for Sheku Bayoh for National Theatre of Scotland, Royal Lyceum Theatre, Edinburgh and Edinburgh International Festival and previously worked with Cora Bissett on the musical Glasgow Girls; Paul McCole (Frank) known to screen audiences for his roles in Still Game, Limmy’s Show and Sunshine on Leith and previously worked with the National Theatre of Scotland on The Strange Undoing of Prudencia Hart; Martin Quinn (Seamus) made his stage debut playing Oskar for National Theatre of Scotland’s Let The Right One In and can be seen in the film Our Ladies (Sigma Films); Chloe Hodgson (Bernadette) who is making her National Theatre of Scotland debut in the production and Betty Valencia (Ann-Marie) currently appearing in Cinderella at Perth Theatre, with previous appearances in WeCameToDance (Food Tank), The Last Bus (Hurricane Films) and This Girl Laughs, This Girl Cries, This Girl Does Nothing (Stellar Quines, Imaginate).

Cora Bissett director of Orphans said: “Orphans is for me, and a secret legion of devotees, the quintessential cult Scottish film and bringing it to the stage now, in this new musical version, couldn’t be more timely. Over the last 18 months we have lost family, jobs, relationships, health and…. hope, and in some ways we are just finding it again. This musical is about raw grief, and the madness that lies within that. The emotions are epic and messy and the songs raucous, and heart aching. It’s for people who think they hate musicals but love a great story, and for musical lovers who would like to see a musical rooted firmly in a world that feels like theirs. I am thrilled Peter Mullan has allowed us to re-imagine this Scottish classic with an incredible team of creative collaborators and a brilliant new generation of actors.”

The music for Orphans is created by independent Glasgow-based artists Roddy Hart and Tommy Reilly. Together they have written the score for the film, Our Ladies, the music and lyrics for the zombie comedy film Anna and the Apocalypse, and for Steven Spielberg’s revival of Animaniacs winning a Daytime Emmy award for Best Original Song for an Animation.

Cora Bissett is an acclaimed Glasgow-based director, actor and writer. Her first production Roadkill, created with writer Stef Smith, won nine major awards and an Olivier award for Outstanding Production. She is an Associate Director with the National Theatre of Scotland and her productions include the hit musical Glasgow Girls, Adam and Rites. Cora recently wrote and performed her own autobiographical story, What Girls Are Made Of (Traverse Theatre/Raw Material). The award-winning gig theatre production toured internationally She also recently co-directed Adam for the National Theatre of Scotland, Hopscotch Films, BBC Scotland and BBC Arts which won a Scottish BAFTA for Best Scripted TV.

Cast and creative biogs can be found on the National Theatre of Scotland website.

A National Theatre of Scotland production based on the Film ORPHANS written and directed by Peter Mullan © Channel Four Television Corporation and the Glasgow Film Fund 1997.