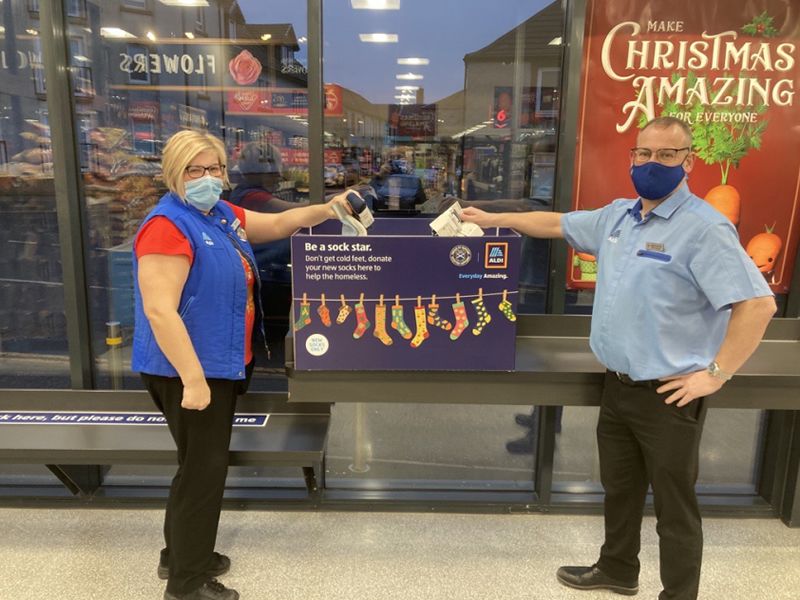 NOT SOCKS AGAIN?! DONATE YOUR UNWANTED CHRISTMAS SOCKS TO PEOPLE WHO NEED THEM MOST THIS FESTIVE SEASON

The initiative encourages customers to donate any unwanted or extra unused socks they may have received as Christmas gifts to charities supporting people in need across Scotland.

Every year, millions of people receive socks for Christmas that they often don’t want or need, charities across Scotland do, and Aldi’s ‘Not Socks Again?!’ campaign aims to put these gifts to better use by donating new and unused socks to those who need them most.

Aldi’s Sock Amnesty’ boxes will be in stores across Scotland from the 3rd of January until the end of the month, where people can drop off their unused socks to help keep vulnerable people warm this winter.

Aberlour Children’s Charity helps to improve the lives of Scotland’s struggling children, young people, and their families by providing support to so many who are affected by a variety of overwhelming hardships including poverty, disadvantage, and discrimination.

SallyAnn Kelly, CEO of Aberlour Children’s Charity, said: “We are so pleased to be participating in the Aldi Socks Donation campaign. Right now, thousands of families across Scotland are trapped in poverty, struggling to pay their bills and keep their children and young people warm. The socks donated will make a real difference to the families Aberlour works with, and on behalf of them, I would like to thank Aldi and their customers for their kind donations”.

Richard Holloway, Regional Managing Director for Scotland, said: “Following an immensely challenging year, the team at Aldi Scotland were eager to support charities which are working tirelessly to help those in need. In winter, charities are always looking for essential items to be donated, and so we thought, why not encourage our customers to donate any unwanted gifts of socks to people who truly need them.

Aldi will also contribute a £250 donation to each charity in the hope of helping the most vulnerable in our communities.

Aldi’s Sock Amnesty boxes will be in store from 3rd January and customers are invited to drop off any unwanted, new and unused, socks which will be donated to the charity in their local area.”

This initiative builds on Aldi’s commitment to supporting communities across Scotland. Since 2016, Aldi’s Scottish Sports Fund has supported over 500 local clubs with more than £290,000 worth of donations. In addition, Aldi has helped to provide over 10 million meals to vulnerable people across the UK through its partnership with community engagement platform, Neighbourly. Aldi also helped 12 local foodbanks this year after it relaunched its popular Supermarket Sweep programme this year.

To find your nearest Aldi store please visit their website HERE and donate your unwanted socks this Christmas.