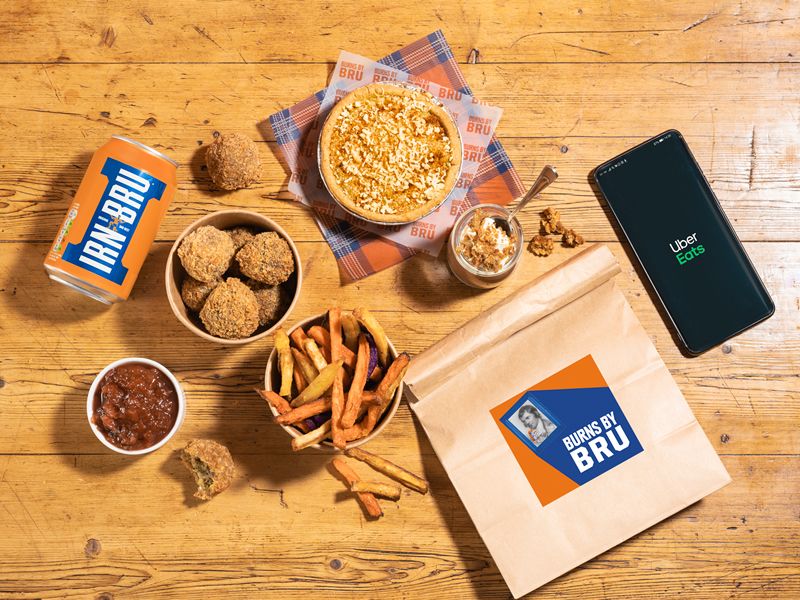 Scotland’s other national drink, IRN-BRU is reimagining Burns Night to serve up a supper that Rabbie and his friends might have enjoyed if they were celebrating today.

BRU has joined forces with UberEats to launch its first-ever restaurant, Burns By BRU to bring IRN-BRU to the table this Burns Night. The pop-up will be delivering suppers to homes across Edinburgh and Glasgow from Friday 21 to Tuesday 25 January.

The launch comes following a recent survey by ScotPulse into how Scots celebrate Burns Night, which has revealed that whilst 1 in 2 (55%) Scot’s associate Burns Night with a celebration of being Scottish, almost half (49%) of younger millennials don’t celebrate the National Bard at all.

The generations are divided when it comes to the supper itself, with 50% of Scots placing the importance of Burns Night on haggis, neeps and tatties, but almost a fifth (17%) of people under the age of 34 don’t actually know how to make a Burns Supper, and 15% would be more excited about Burns Night if there was a more modern version of the meal.

As the drink of choice for 1 in 3 young Scots on Burns Night (39%), IRN-BRU has launched ‘Burns By BRU’ to keep the celebrations alive. IRN-BRU is hoping that by bringing the iconic supper straight to people’s doors, younger generations across Scotland will be raising a can to the National Bard this year.

On the menu is haggis nuggets with a spiced IRN-BRU chutney, fried neeps and tatties and a Mac ‘n’ Cheese Pie with a BRU glazed bacon crumble. All washed down with a can of IRN-BRU and followed by a whisky chocolate mousse. A vegan option is also available.

Giving back to Scots who might be going without this Burns Night, IRN-BRU will donate the full cost of every meal (£5) to foodbanks across Glasgow and Edinburgh.

Adrian Troy, Marketing Director at AG Barr, said: “As a brand that’s so proud of our Scottish roots, it was a no-brainer to unite with UberEats to make sure that future generations continue to celebrate a day that’s become synonymous with celebrating being Scottish.”

“We hope BRU fans across the country will join us in raising a toast to Rabbie whilst tucking into their reimagined Burns supper. And we are pleased to say that for every Burns by BRU meal ordered, the full cost be donated directly to Scottish foodbanks - as the bard himself said, ‘a man’s a man for a’ that’.”

BRU fans better be quick as there will be a limited number of meals available each night for residents within the Uber Eats delivery radius.

Burns By BRU is open every evening from 5.30pm on Friday 21 – Tuesday 25 January. Search for ‘Burns By BRU’ on the UberEats app and share a snap of your supper on Instagram @IrnBru and Twitter @IrnBru with #BurnsByBru.