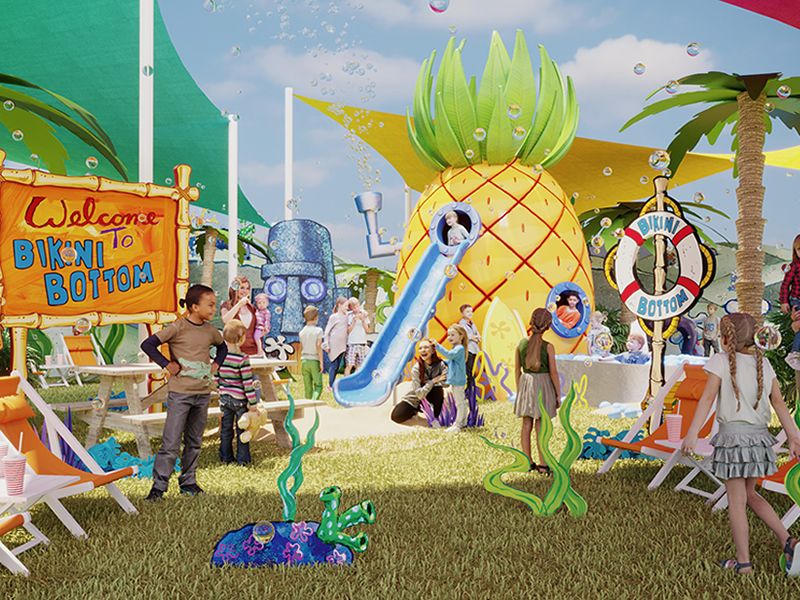 Nickelodeon has announced a brand new outdoor immersive event, The Nickelodeon Experience, set to launch this summer in Saughton Park, Edinburgh. This first-of-its-kind experience promises to be an epic adventure for the entire family, with it also being the first time in ten years that a Nickelodeon event has taken place in Scotland.

Kicking off in one of Edinburgh’s most beautiful green spaces, Saughton Park, the experience will be touring the UK from July 2022 making further stops at Knebworth House and Heaton Park in Manchester.

Adventure seekers, aged 2-14 years old, can explore the worlds of their favourite Nickelodeon TV shows and discover ten activity zones. From multi-sensory and interactive adventures to creative and skill-based challenges, kids get to map their own journey and curate their own fun.

Kids can go behind the scenes of some of Nickelodeon’s most popular shows including The Thundermans School for Superheroes where they’ll learn to acquire their own super-powers. Step into an episode of Henry Danger, where Nick fans must navigate Henry Danger’s Maze full of secret twists, turns, puzzles and passages. They can also race against the clock to solve the Hunter Street Escape Room mystery, which puts teamwork to the test in an attempt to crack the code and find the key.

The adventures don’t stop there! From a trip to Adventure Bay with an opportunity to meet PAW Patrol’s fan-favourites Chase and Marshall, to a sub-terranean adventure in The Teenage Mutant Ninja Turtles’ underground lair, complete with ooze covered tunnels, Nick fans will be utterly captivated in this immersive outdoor adventure. What’s more, an arts and crafts zone featuring Baby Shark’s Big Show and Blue’s Clues themed activities awaits all budding artists. Attendees can also jump on a giant pirate ship, play in rock pools, and make a splash in an immersive play zone based on the swashbuckling world of Santiago of The Seas.

For the perfect finale to the experience, you’re invited to the Slime Time Party to finally know how it feels to get SLIMED – the ultimate Nickelodeon honour!

Alongside these immersive zones, children and their parents can relax at SpongeBob SquarePants’ Bikini Bottom Beach, where they can also sample delicious delights from the many themed food and beverage stalls and visit the Nickelodeon store and take home the perfect memento from an incredible range of exclusive Nickelodeon Experience merchandise.

Capacities are limited but you can book your tickets now at www.thenickelodeonexperience.co.uk

The Nickelodeon Experience is proudly produced by The Luna Cinema and suitable for children aged two to fourteen years old.

George Wood, founder of The Luna Cinema says: “We cannot wait for the launch of The Nickelodeon Experience in Edinburgh this summer! For years we’ve wanted to develop a truly interactive experience that allowed kids to immerse themselves in the worlds of their favourite TV shows, just as we do with Friends fans at FriendsFest and film lovers with our Luna Cinema screenings, and it’s amazing to be able to bring Nickelodeon to families in Scotland for the first time in ten years! To have such an iconic catalogue of shows, including global brands like PAW Patrol, The Thundermans and SpongeBob SquarePants under the Nickelodeon umbrella is a treasure trove of content to explore and bring to life, and we’re really excited to make it happen.”

Virginia Monaghan, VP, Events and Experiences, ViacomCBS UK, commented: “We are thrilled to be partnering with The Luna Cinema to bring our hugely popular Nickelodeon and Nick Jr. shows to life through this uniquely immersive experience. This is a chance for children to make new memories with friends, in a safe and fun setting, and with their favourite characters. Nickelodeon hasn’t been to Scotland for ten years now, so it’s going to be extra special to be able to kick-start the nationwide tour in Edinburgh.”