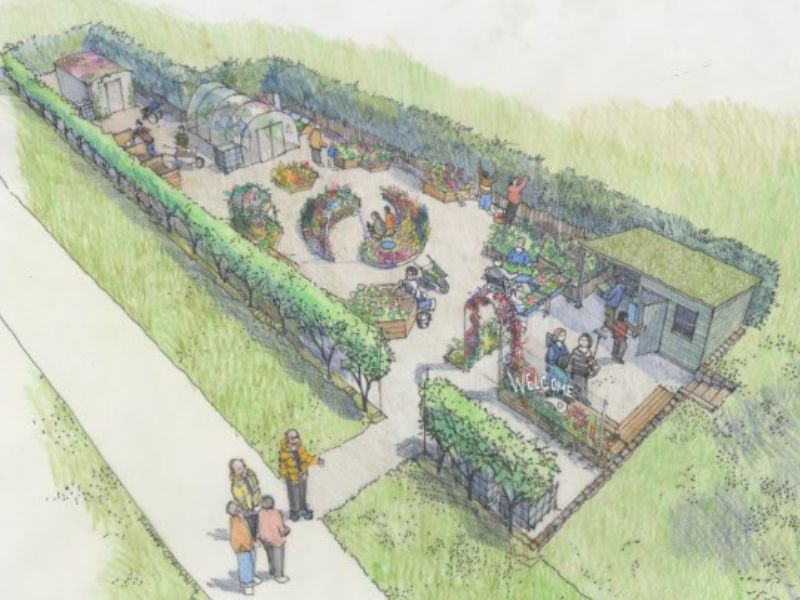 Unveiled on BBC One’s The One Show by JJ Chalmers, Paisley joins Huntingdon in England and Randalstown in Northern Ireland as one of four areas to receive funding for a community garden – with the Welsh winner still to be announced.

Barshaw Park will see the creation of a new space that nods to the town’s textile past with the design featuring the world-famous Paisley Pattern through curved and accessible raised beds and extensive trellis work for fruit and flower training that frame the entry way and ensure an inviting and sociable space.

Moveable beds, with curved undersides to sit a wheelchair under comfortably and provide much needed versatility in a community space, will be made from local distilleries’ recycled barrels.

At the site of the former donkey paddock, the Community Garden has been designed by landscape duo Nicola Semple and Susan Begg of Semple Begg and will be managed by the volunteers from Friends of Barshaw Park - who will receive an additional £15,000 over the course of the next three years for investment in the garden and the group’s work within the community.

Irene McDonald, Chair of Friends of Barshaw Park, said: “Community gardens are all too often formal affairs, fenced off from the very people wanting to access them.

“The redevelopment of our space prioritises creating a warm welcome with benches for socialising, or simply observing, with fragrant, colourful climbers for inspiration and relaxation.

“The moveability and versatility of the raised and border beds means everyone should have the chance to learn and bestow new gardening skills in Barshaw Park and we’re excited to open it to the public this Spring.”

Friends of Barshaw Park will run a series of workshops from the space, such as the harvesting and cooking of crops, promote a gardening buddy system to help with hands on learning and operate a tool library, filled with equipment, to inspire and facilitate gardening beyond the confines of the site. Local people will also be able to take home fresh produce and cut flowers grown in the garden.

Angela Smith, RHS Development Officer for Scotland, said: “Friends of Barshaw Park are an energising and inspiring group of gardeners who are helping to restore their namesake space to its former glory.

“The creation of a new community garden will serve as a local hub, enabling the group to even more freely share their skills with residents and inspire many more people to get growing.”

The space will be framed on all sides by walls made from larch sleepers sourced and grown on the Isle of Bute, espalier fruit trees of local varieties, and edible hedges with Scottish berries. Natural composting, wormery and extensive rainwater collection underpin the garden’s green credentials.

Karen Anderson, Sustainability, Place & Assets Manager at Renfrewshire Council, said: “We’re delighted for the Friends of Barshaw Park group that they have been successful in their bid for a new community garden and I’m sure families and parkgoers will be delighted at the new, inviting space within the park as the designs look fantastic.

“We work closely with the group to enhance this prominent public park in Renfrewshire at every opportunity and we will continue to support them however we can to bring the new garden to life.”