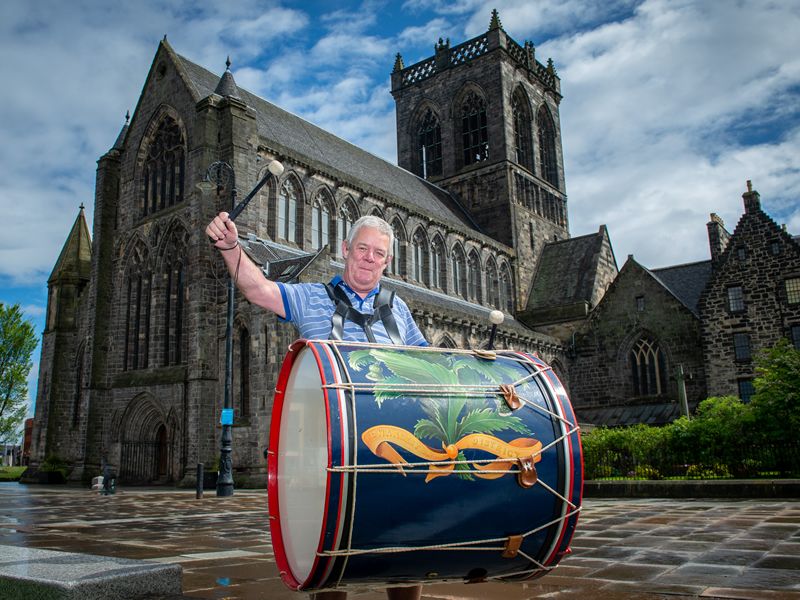 The event, which is one of the world’s oldest workers’ festivals, will take place on Saturday 2 July and will see the return of the traditional parade and Burning of the Cork, live performances, workshops, family entertainment and much more.

The Sma’ Shot parade will leave from Brodie Park at 12 noon, led by sound of the Charleston Drum, before making its way through Paisley town centre and finishing at Abbey Close.

This year’s parade is being co-ordinated by Bridgeman Arts in collaboration with a number of local community groups, performers and musicians and will tell exciting, undiscovered stories of weavers' pasts as part of Scotland's Year of Stories 2022.

Once it arrives at the main event site around Abbey Close and Bridge Street, the parade will be followed by a performance from local dance group right2dance and the Burning of the Cork – a highlight of the Sma’ Shot Day celebrations.

Tony Lawler, the Charleston Drummer, said: “I’m really looking forward to this year’s Sma’ Shot Day celebrations and I’m so chuffed that we’re back with a live event this year.

“I always look forward to leading the parade as I love seeing all the people lining the streets and cheering and I love seeing the kids’ smiling faces.

“It’s a fun day out and it’s important that we remember the victory of the local weavers. It’s our culture, it’s our heritage, it’s our history – and Sma’ Shot Day celebrates that.”

The event will also feature performances on the main stage from PACE Youth Theatre, who will re-enact the struggles of the Paisley weavers in their efforts for payment of the Sma’ Shot, the Starlight Music Theatre adult rock choir and swing band, and The Well Happy Band.

Abbey Gardens will host a ‘Doon the Watter’ seaside experience with deck chairs and a beach for families to enjoy alongside Circus skills with Paisley Community Circus and bubble making and carnival fun from Big Top Circus.

All or Nothing Aerial Dance Theatre will also dazzle visitors with their aerial acrobatics and performances. They will provide exciting ‘Watch, Fly, Come and Try’ bookable workshops for ages 7+ and adults to try their hand at trapeze and other activities, led by professional aerialists.

In addition to events at Abbey Close and Bridge Street, there will be an all-day programme of live music at The Bungalow venue – including a kid’s ceilidh in the afternoon and the popular Poetry Slam in the evening – and buskers performing in Shuttle Street throughout the day.

The historic Sma’ Shot Cottages will also be open for tours, where visitors can take a trip back in time to two distinctive periods of Paisley’s rich textile history and see what life was like as a weaver in the town in the 18th and 19th centuries.

Plus, there’s an afternoon of dancing and timeless tunes to enjoy at the Tea Dance at the Methodist Central Hall.

Sma’ Shot Day is organised by Renfrewshire Council as part of the area’s major events programme which attracts thousands of visitors each year.

“The fabulous parade winding its way through the town and the spectacular Burning of the Cork are sights not to be missed during this fantastic full-day programme.

“This year’s event will offer a host of activities and performances for kids and grown-ups to enjoy, combining all the traditional elements of the event with new experiences showcasing Paisley’s creativity and heritage.

“It's great to see our much-loved events programme back and I can't think of a better day than Sma' Shot Day to bring the community together. I'd encourage everyone to come along and join the fun.”

To find out more about this year’s Sma’ Shot Day celebrations and how to book places at event workshops, visit: paisley.is