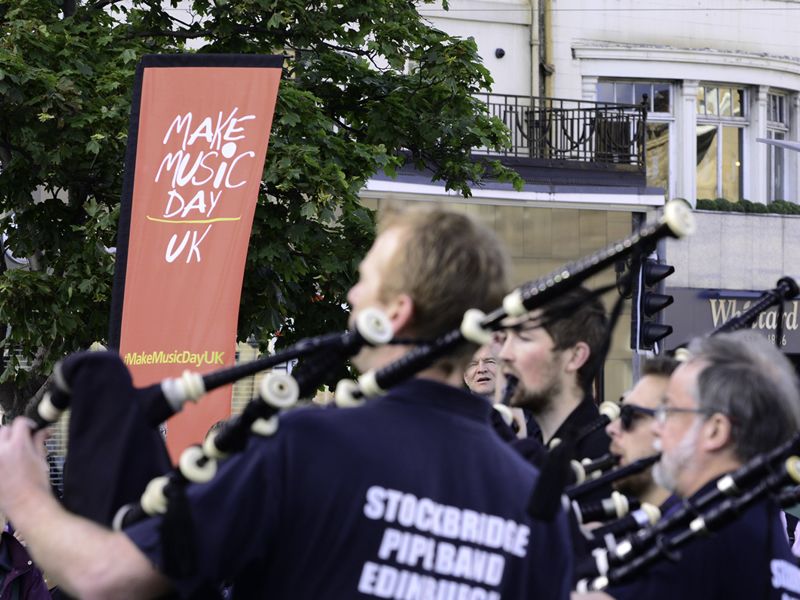 A diverse range of free events will take place across the UK this Make Music Day to celebrate the world’s biggest grassroots DIY music festival and mark the global celebration which takes place annually on 21 June. Double the amount of events will take place in Scotland this year compared to 2021, with the vast majority of all UK events being live.

Make Music Day is the UK’s largest single-day music festival, encouraging musicians, producers, promoters and music lovers to collaborate and organise free in-person and online performances in their communities. Solo performers, groups and music creators of all types are invited to take part, regardless of age, ability or musical genre.

This year will see the largest representation from Scotland to date, making up a third of all Make Music Day UK events, and professional music organisations such as RSNO, EIF, Dunedin Consort and Nevis Ensemble will take part in various events. Scottish musicians Nicola Benedetti and Iona Fyfe will also be ambassadors for the festival.

Singer Iona Fyfe said: “Make Music Day has always achieved the goal of bringing people together to create music – with an emphasis on community music-making. Now more than ever, musicians from all backgrounds and experiences are eager to create music with others and collaborate, whether that be online or in person.

“The festival has been so instrumental in merging both online collaboration and in-person events seamlessly and I’m excited to have taken part in the Global Folk Challenge, which will see several musicians share songs from their respective cultures, customs, languages and traditions.”

In Scotland, events already planned include Make Music Day Glasgow at Byres Road and the lanes. The day of live music will consist of free performances in venues including Embargo, Tennents Bar, Ubiquitous Chip and the Record Factory.

A string of events will also take place at Edinburgh Central Library from noon until 6 pm, including performances from the Edinburgh Mandolin and Guitar Orchestra, Fernando and Michalina, Rolling Hills Chorus, Tenement Jazz Band and Drookit.

In one of the largest events of the day Pulse of the Place will be bringing together 100 young street drummers to perform at the foot of The Mound in Edinburgh.

Events can take place anywhere, as highlighted by the event Singy Dipping, where Edinburgh’s famous outdoor swimmers “Wild Ones” will walk into the sea at Portobello and perform some joyful songs, encouraging audience members to watch and listen on the beach or take a dip themselves.

Classical guitarist Jacopo Lazzaretti will also perform a private concert at Aurrida House, Orkney for people who are neurodivergent or experience learning difficulties. Meanwhile, Musicians in Exile, a group of refugee and asylum-seeking musicians in Glasgow who celebrate diverse cultures in song and music, will perform at Govan and Linthouse Parish Church. They will take to the stage to showcase Home, a performance full of stories and songs about people and places the performers left behind, celebrating their cultures through the freedom of song.

All events are free and can be found on the Make Music Day UK website, where anyone can search for an event happening in their local area or online.

In addition to organising their own events for Make Music Day, musicians are invited to take part in one of the many national and international projects designed to encourage global collaboration. Scottish performers will feature in the global Make Music Day broadcast, accompanying performances from Australia, India, Cyprus, Nigeria, Germany and the US.

Paul Gudgin, Co-Director of Make Music Day UK, said: “This is going to be an outstanding year for Make Music Day in Scotland. With the support of Creative Scotland we are presenting a large and incredibly broad programme of live events involving performers of all ages throughout the country.

“Make Music Day will be a timely celebration of the strength of music in Scotland and a symbol of the way music is bouncing back from the pandemic.”

Since beginning as Fête de la Musique in France in 1982, Make Music Day has grown into a global phenomenon that takes place annually in 125 countries, always on 21 June. The event first came to the UK in 2012, and 2017 marked the first UK-wide, coordinated celebration with support and funding from national organisations, resulting in 147 performances. In 2021, Make Music Day saw 30,000 performers present 3,000 events to a combined online and live audience of 330,000 people across the UK.

Alongside the support of partner organisations and their combined networks, development in Scotland is supported by Creative Scotland.