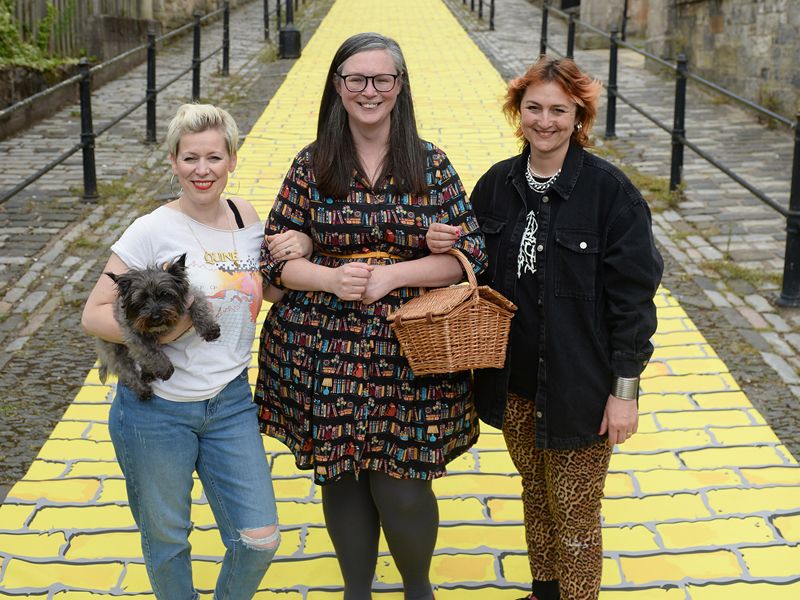 The National Theatre of Scotland with partners OneRen and supported by Future Paisley is taking up a year-long artistic residency in Paisley from June 2022, in collaboration with leading Scottish artists Cora Bissett and Bex Anson.

Inspired by L. Frank Baum’s legendary American classic 1900 novel The Wonderful Wizard of Oz, the talent and people of Paisley will be invited on a creative journey, which will culminate in a high octane, visually arresting carnivalesque performance weaving through indoor spaces and on the streets of Paisley in June 2023. Over 200 local participants, alongside professional actors and artists will be involved in the co-creation of this unique event.

Known and loved by all, the iconic musical fantasy, The Wizard of Oz, inspired by the novel has enduring power and relevance, with its universal themes of self-sufficiency, the quest for truth and the power of unusual friendships. OZ! - A Yellow Brick Road Adventure in Paisley will be inspired and created by the talent of Paisley. The town’s culture of creativity is evidenced by the large number of visual arts programmes, dance schools, choirs, songwriters and theatrical and musical talent in the town.

This spectacular new show will develop and showcase Paisley’s extraordinary talent with dance, theatre, music, puppetry and circus, all being showcased in the final event. Dorothy is a streetwise lassie from Paisley, and there will be twists and tricks aplenty in this new version of the story which will see Paisley transformed into a living stage set.

Set in a parallel Paisley, sometime in the near future, the wonderful world of Oz and the Emerald City will be transported to Paisley Town Centre. Featuring a brand-new script and original songs created with the people of Paisley under the inspirational creative leadership of Cora Bissett and Bex Anson, the Paisley OZ! will revisit the original political satire of the book for a contemporary audience in Paisley and beyond. The world of Oz and the Emerald City in familiar locations around Paisley town centre with scenes inspired by key chapters from the book. The Paisley Centre, Piazza Shopping Centre, public realm space at County Square, The Paisley Cenotaph and the High Street, The Wynd Centre and Outspoken Arts Scotland’s venue The Art Department will all play leading roles in this spectacular promenade experience.

Over the next twelve months, Cora and Bex will lead a team of artists to deliver a significant community engagement programme working alongside local community groups in Paisley including Kibble, The STAR Project – Paisley Men’s Shed, PACE Theatre Company and Art Boss - YOProducers. From August 2022 there will be opportunities for the public and community groups to get involved including an exciting public programme of Oz! themed workshops and creative sessions which will animate the town over the year.

Bex and Cora and other artists will be taking up residency at Paisley Centre, including an evolving window display, created by illustrator Jennie Bates in The Art Department formerly Allders Department Store.

OZ! A Yellow Brick Adventure in Paisley will have a stall at Sma’ Shot Day on 2 July with information about the project, offering sign up opportunities for creative sessions.

The first of the workshops and sessions have been announced including: a song writing workshop for theatre, suitable for all ages and abilities, with Emmy award-winning composing duo Roddy Hart and Tommy Reilly; “A Wee Dander down the Yellow Brick Road” drop-in blether sessions to chat life, dreams and red shoes at Café Su led by Cora Bissett and Bex Anson; monthly social events at the Emerald Lounge in The Art Department; Oz! Wallpaper making workshops to form part of the Emerald Lounge wallpaper, led by illustrator Jennie Bates and “Wooooof!!”” Toto The Dog drama workshop for all 4-legged wannabes led by Bex Anson and Lewis Sherlock

Bex Anson is a visual theatre director and is already creatively connected to communities in Seedhill/Paisley through her sited performance work with her company MHz scenography, which saw the acclaimed dance performance, STRUT take to the streets of Paisley earlier this year. She brings with her extensive experience in street performance, urban outdoor arts, circus and dance.

Cora Bissett is an acclaimed, award-winning performer, director, and film maker. She most recently directed Orphans – a new Scottish musical for the National Theatre of Scotland and Adam, reinvented as theatrical on-screen drama for the BBC which won a Scottish BAFTA for Best TV Scripted.

Future Paisley is a partnership—led by Renfrewshire Council with OneRen, supported by local and national partners who care about Paisley and are passionate about the positive difference culture can make to a place and people’s lives. Future Paisley includes Renfrewshire Council’s £100m investment to transform Paisley’s unique historic venues and public spaces and create new homes for cultural activity.

By summer 2023, Paisley’s unique cultural venues – including it’s A-listed Victorian Town Hall, and its Arts Centre – are due to reopen after extensive refurbishment, and National Theatre of Scotland in partnership with OneRen, supported by Future Paisley invites the communities of Paisley to celebrate this rejuvenation, and join them on an exciting new theatrical yellow brick road adventure.

Cora Bissett and Bex Anson co-creative lead artists said: “We met as working mums madly trying to entertain our young kids in Queens Park during lockdown and decided to combine forces to take on this massive and exciting challenge of creating a new large-scale work with the people of Paisley. We are already bowled over by the amount of talent, ingenuity and passion of the people of Paisley and by the town’s rich history and quirky buildings. We are looking forward to bedding ourselves into Paisley over this next year and dreaming up a contemporary, fantastical reimagining of this timeless classic which everybody knows and loves.”

As we embark on this wonderful adventure down the yellow brick road in Paisley, I want to acknowledge the vision of both One Ren and Future Paisley and our lead artists Cora Bissett and Bex Anson. We have between us the courage, the heart and the brains to bring together all of Paisley in this ambitious celebration of talent, storytelling and creativity, building up to OZ! an unmissable, spectacular event across the town in 2023.”

Councillor Lisa-Marie Hughes, Chair of OneRen and the Future Paisley partnership board, said: “This is a fantastic addition to Paisley’s annual events programme – and one that helps strengthen the area’s growing reputation as one of Scotland’s must-visit destinations for top-class cultural events. What excites me most is that community engagement and participation is at the very heart of it. Oz! will provide opportunities for local freelance artists and organisations but also employment for local people, as well as the chance to learn from and be inspired the team of nationally-recognised artists and performers which National Theatre of Scotland have pulled together.”

How people can get involved:

Online Booking opens for all workshops from July 2.
In person booking for workshops at Sma’ Shot day on July 2.