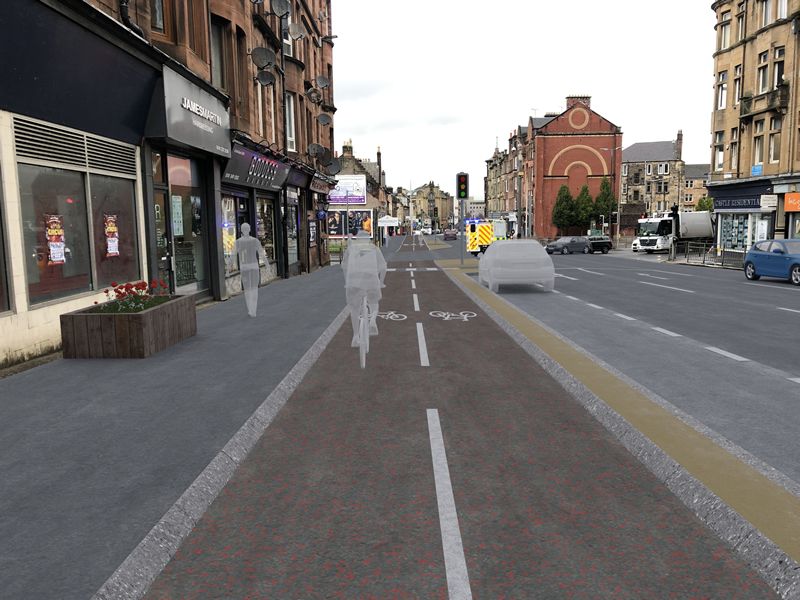 Local residents, businesses and community groups are being asked for their views on regeneration plans for Causeyside Street in Paisley which would improve active travel connections, support sustainable transport and increase parking and loading options.

The proposals from part of the ongoing transformation of Paisley town centre, in which major investment is being made in its historic venues, including the plans to turn Paisley Museum into a world-class destination, Paisley Town Hall modernisation into a landmark entertainment venue, the new Learning and Cultural Hub on the High Street, and an extension and upgrade to Paisley Arts Centre.

The plans aim to make Causeyside Street an attractive place to live, work and visit by enhancing walking provision in the area with clearer footways making it safer for residents, commuters and visitors, as well as improved accessibility at bus stops to make it easier for passengers to board and disembark.

A new two-way cycle route on Causeyside Street would connect Paisley Gilmour Street train station with Canal Street Station, as well as the popular National Cycle Route 7, and would be separated from the main road carriageway and pedestrians.

There would be increased parking spaces, with four being added north of the Canal Street junction and the potential to add a further 51 spaces and designated loading bays south of the junction by removing the current single yellow line restrictions.

Pedestrian crossing facilities would also be improved and new electric charging infrastructure is currently being added at Stow Brae to support the move to sustainable transport.

Councillor Michelle Campbell, Convener of Renfrewshire Council’s Infrastructure, Land and Environment Policy Board, said: “These are exciting proposals as we look to regenerate Causeyside Street for residents, businesses and visitors alike and ensure it retains its importance alongside the ongoing transformation work at the Town Hall, Museum, High Street and Arts Centre.

“With climate change high on our list of priorities as a Council, it’s important that we encourage sustainable transport wherever possible and the new cycle route would be a great addition as it would connect our two town centre train stations, as well as join the National Cycle Route 7 – with the plans also making it safer and easier for people to walk through this part of town and utilise bus services.

“The designs also allow us to add more parking and loading spaces along Causeyside Street which should benefit people visiting the town centre using all modes of transport and bring a boost to businesses in the area.

“Please take this opportunity to look at the plans and provide your feedback to allow the next stage of the project to reflect our local communities.”

Concept designs, visualisations and a short survey for feedback are available on the Council website at www.renfrewshire.gov.uk/CauseysideStreetSurvey, with a closing date for responses of Sunday 7 August 2022.

Renfrewshire Council’s project team are keen to hear from local Paisley residents, nearby businesses and regular users of Causeyside Street and will be available to meet with the public every Wednesday and Friday between 12pm-2pm at the PaisleyIs branded 5A High Street in Paisley during the engagement period.