A memorial service will be held in Paisley on Thursday 23rd January to remember loved ones who have lost their lives to suicide. 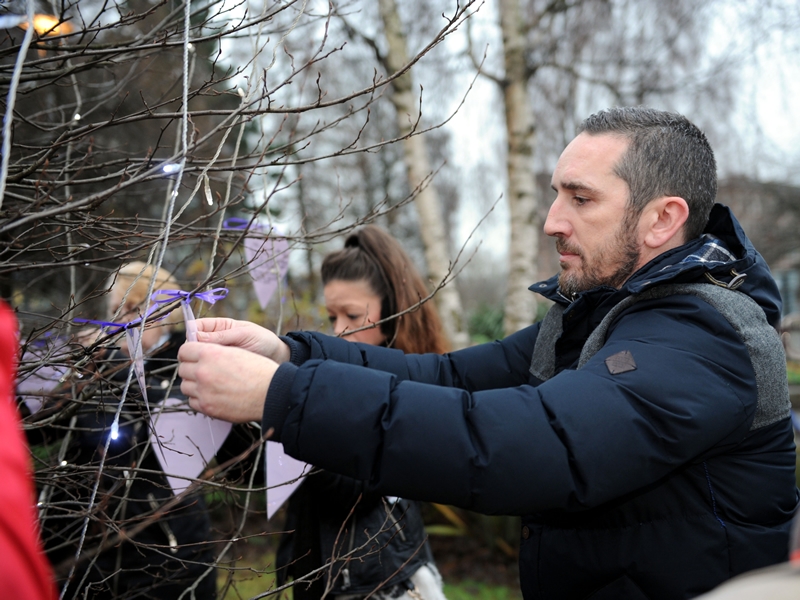 About Survivors of Bereavement Through Suicide Annual Memorial Service

Renfrewshire’s annual memorial service to commemorate those who have lost their lives to suicide will be held in Paisley later this month.

A short service will take place on Thursday 23 January at Renfrewshire House, hosted by support group Survivors of Bereavement by Suicide (SOBS).

The service is open to all and anyone who has been affected by suicide is invited to meet in the Marriage Suite from 3:10pm to collect a commemorative purple heart on which they can write a message to a loved one, if desired.

At 3:30pm there will be a short set of readings followed by a procession to the memorial tree where Renfrewshire’s Provost Lorraine Cameron will light the tree.

After the service, all those in attendance are invited to join the Provost, the local SOBS support group and the Choose Life team for light refreshments in Paisley Abbey.

The memorial tree was first dedicated in 2010 as a permanent memorial to those who have died through suicide and is believed to have been the first of its kind in Scotland.

Provost Cameron, who helped establish the tree, said: “Over the past ten years this service has become extremely important to members of the local community and I’m honoured to be involved.

“Suicide is still very much a taboo subject, but the Choose Life and SOBS team will be available after the service to provide any support you, or a friend or family member, may need, and I would encourage anyone who has been affected by suicide in any manner to come along.

“If you’re unable to make it along, please get in touch with the team to talk about how you are feeling or what support you need. Someone is always there to listen.”

Anyone unable to attend the service who wishes a message to be placed onto the tree can get in touch in advance or can visit the council reception at any time following the service to collect a commemorative heart.

For more information contact the Choose Life Team on 0141 849 2200 or visit www.renfrewshire.gov.uk/sobs.

While we take every opportunity to ensure the details for Survivors of Bereavement Through Suicide Annual Memorial Service are accurate, we always advise that you contact the event organiser before setting out for the event to avoid disapointment. All information (whether in text or photographs) is given in good faith but should not be relied upon as being a statement of representation or fact.

Always wanted to learn how to sew but just don’t know where to start? Then this four week course from Thimbleberry Sewing is the course is for you!

Bring your little ones along to Dobbies Braehead for an exciting festive experience at Santa's Grotto!