Renfrewshire Council's Spotless September is back again this year - a little different, but still back! 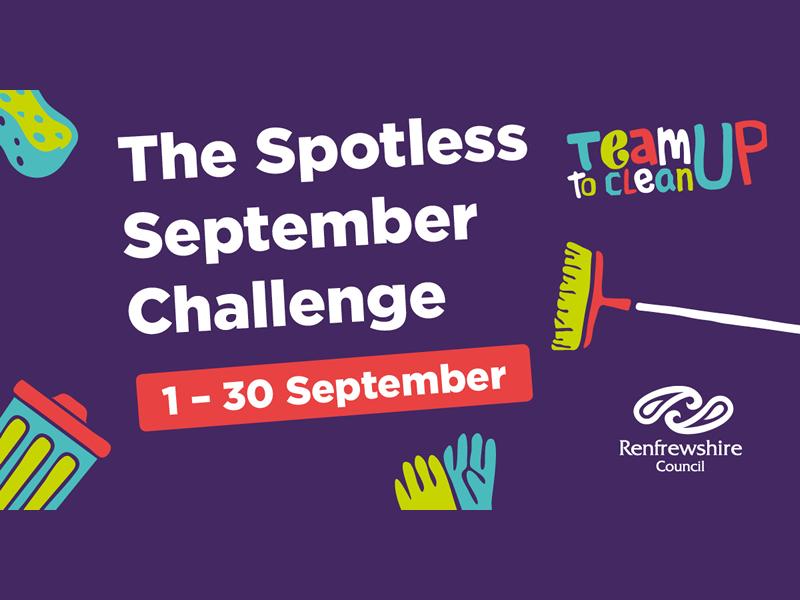 About The Spotless September Challenge

Volunteers from across Renfrewshire are set to make it a Spotless September once again as they head out into their communities to brighten up the area where they live and tackle litter.

A mainstay of Renfrewshire Council’s award-winning Team Up to Clean Up campaign, the month-long campaign saw more than a thousand people take part last year – with community groups, schools, businesses and lone volunteers all heading out on litter picks.

Hundreds are expected to head out again this year either individually or in small groups to ensure they can continue to do their bit, while remaining safe at all times during the ongoing pandemic.

Anyone who wants to take part can get in touch with the team to be provided with sanitised equipment including litter pickers and bags, as well as having the collected litter taken away by the Council’s StreetScene team.

Team Up to Clean Up is a joint initiative between the council and the community and aims to improve the area’s local environment and change the behaviour of those who think it is acceptable to litter.

The council is running an increased litter picking, road sweeping and drain clearing programme, while the community are supported with equipment and the collection of rubbish to take part in litter picks.

The campaign has also expanded to include community caddies, which allow volunteers to trim and tidy local green spaces, as well as the creation of children’s book ‘The Clumps’ Big Mess’ which every primary school child in Renfrewshire received to inspire them to be a part of the campaign.

For more information, including how to take part, visit www.renfrewshire.gov.uk/SpotlessSeptember.

While we take every opportunity to ensure the details for The Spotless September Challenge are accurate, we always advise that you contact the event organiser before setting out for the event to avoid disapointment. All information (whether in text or photographs) is given in good faith but should not be relied upon as being a statement of representation or fact.

Always wanted to learn how to sew but just don’t know where to start? Then this four week course from Thimbleberry Sewing is the course is for you!

The UK's number one tribute to Stereophonics head to the Bungalow Paisley to perform a mind blowing set with all the classics that you will know and love!

Cycle your purple socks off this October with by taking park in Glasgow Children's Hospital Charity's brand new cycling challenge... Pedal It Purple!