Christmas gift to charity is a grotto cash!

There was an early Christmas present in Santa's sack for the Ronald McDonald House charity yesterday – a giant cheque for £1000. 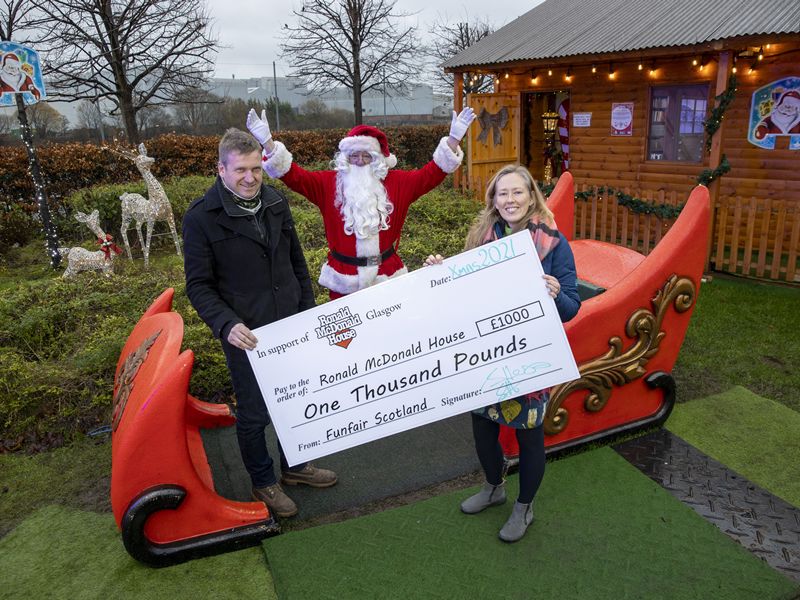 Funfair Scotland – the operators of Santa’s Grotto at the Braehead Centre – are making a donation to the charity every time someone buys a ticket on the Eventbrite booking website to see Father Christmas in the grotto.

And Helen Craig, house director at the Ronald McDonald House Glasgow visited Braehead to thank Bennett and Raecher Hiscoe, from the Funfair Scotland family business for donating the £1000 to the charity.

The Ronald McDonald House provides cost-free living accommodation just minutes from the wards for families of seriously ill children being treated at the Royal Hospital for Children, in Glasgow.

Helen said: “It can be a really stressful time when one of your children is in hospital with a serious illness.

“Naturally, parents and carers will want to be at their child’s bedside as often as possible, and only step away when they are exhausted. Our charity provides a homely place for parents and families to get much-needed rest and privacy in one of the 31 rooms available at Ronald McDonald House Glasgow.

“As an independent Scottish charity we can only provide this vital service to families in their time of need thanks to the kind-heartedness of people like Bennett, Raecher and members of the public who donate money to help us run the House.

“We really appreciate what the team at Funfair Scotland are doing for us.”

Bennett Hiscoe said: “I was driving into Braehead one day recently and I saw a billboard promoting the Ronald McDonald House Glasgow.

“It reminded me what a great job the charity does providing such a vital service to parents facing their worst nightmare when their child is seriously ill.

“That’s when I decided to do something to help the charity and since Christmas is a time of giving, the best gift the charity could receive is a donation of money.”

Peter Beagley, Braehead centre director said: “We’ve supported Ronald McDonald House for many years. Thanks to Funfair Scotland who are running our grotto for us this year, people can not only give their kids a great experience meeting Santa, but also know they are contributing to a very worthy cause.”

Go to www.braehead.co.uk/christmas/ to book your child a visit to see Santa at Braehead.

And go to www.ronaldmcdonaldhouse.co.uk for more information on the charity.